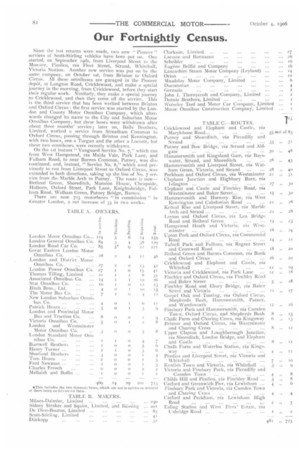 Page 10, 4th October 1906 — Our Fortnightly Census.
Close
Noticed an error?
If you've noticed an error in this article please click here to report it so we can fix it.

Since the last returns were made, two new " Pioneer " services of Scott-Stirling vehicles have been put on. One started, on September 19th, from Liverpool Street to the Monster, Pimlico, via Fleet Street, Strand, Whitehall, Victoria Station. Another new service was put on by the same company, on October 1st, from Brixton to Oxford Circus. All these omnibuses are garaged in the Pioneer depot, at Langton Road, Cricklewood, and make a special journey in the morning, from Cricklewood, before they start their regular work. Similarly, they make a special journey to Cricklewood, and then they come off the service. This is the third service that has been worked between Brixton and Oxford Circus : the first service was started by the London and County Motor Omnibus Company, which afterwards changed its name to the City and Suburban Motor Omnibus Company, but these buses were withdrawn after about three months' service; later on, Balls Brothers, Limited, worked a service from Streatham Common to Oxford Circus, passing through Brixton and Kennington, with two buses, one a Turgan and the other a Lacoste, but these two omnibuses were recently withdrawn. On the 1st instant " Vanguard Service No. 7," which ran from West Hampstead, via Maida Vale, Park Lane, and Fulham Road, to near Barnes Common, Putney, was discontinued, and, instead, " Service No. 8," which used previously to run from Liverpool Street to Oxford Circus, was extended in both directions, taking 'up the line of No. 7 service from the Marble Arch to Putney. The route is now— Bethnal Green, Shoreditch, Mansion house, Cheapside, Holborn, Oxford Street, Park Lane, Knightsbridge, Fulham Road, Walham Green, Putney Bridge, Barnes. ' There are now 723 motorbuses "in commission " in 'Greater London, a net increase of 33 in two weeks.