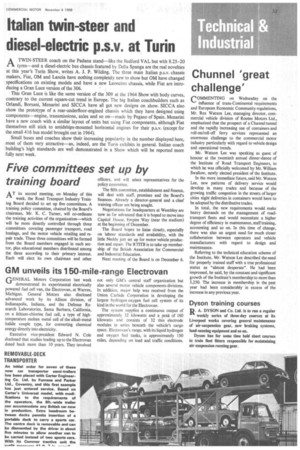 Page 55, 4th November 1966 — Italian twin-steer and diesel-electric p.s.v. at Turin
Close
Noticed an error?
If you've noticed an error in this article please click here to report it so we can fix it.
Keywords : Iveco, Pegaso, Fiat, Bedford Val, Menarini, Sedans

tyres—and a diesel-electric bus chassis featured by Della Spanga are the real novelties at this year's Turin Show, writes A. J. P. Wilding. The three main Italian p.s.v. chassis makers, Fiat, OM and Lancia have nothing completely new to show but OM have changed specifications on existing models and have a new Leoncino chassis, while Fiat are introducing a Gran Luce version of the 306.

This Gran Luce is like the same version of the 309 at the 1964 Show with body curves, contrary to the current square-cut trend in Europe. The big Italian coachbuilders such as Orlandi, Borsani, Menarini and SICCA have all got new designs on show. SICCA also show the prototype of a rear-underfloor-engined chassis which they have designed using components—engine, transmissions, axles and so on—made by Pegaso of Spain. Menarini have a new coach with a similar layout of units but using Fiat components, although Fiat themselves still stick to amidships-mounted horizontal engines for their p.s.v. (except for the small 416 bus model brought out in 1964).

Small buses and coaches show their increasing popularity in the number displayed here, most of them very attractive—as, indeed, are the Turin exhibits in general. Italian coach building's high standards are well demonstrated in a Show which will be reported more fully next week.