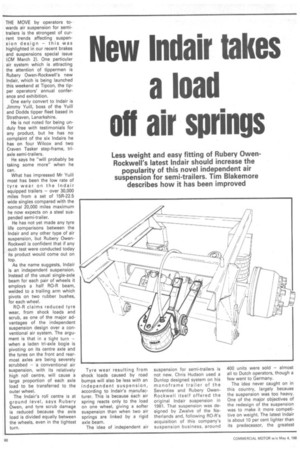 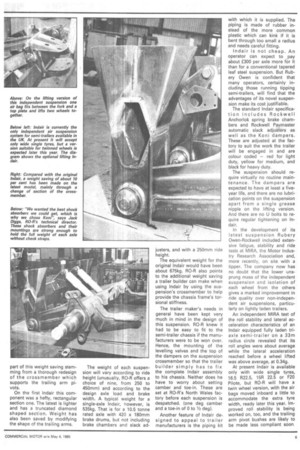 Less weight and easy fitting of Rubery OwenRockwell's latest Indair should increase the popularity of this novel independent air suspension for semi-trailers. Tim Blakemore describes how it has been improved

THE MOVE by operators towards air suspension for semitrailers is the strongest of current trends affecting suspension design — this was highlighted in our recent brakes and suspensions special issue (CM March 2). One particular air system which is attracting the attention of tippermen is Rubery Owen-Rockwell's new Indair, which is being launched this weekend at Tipcon, the tipper operators' annual conference and exhibition.

One early convert to Indair is Jimmy Yuill, boss of the Yuill and Dodds tipper fleet based in Strathaven, Lanarkshire.

He is not noted for being unduly free with testimonials for any product, but he has no complaint of the six lndairs he has on four Wilcox and two Craven Tasker step-frame, triaxle semi-trailers.

He says he "will probably be taking some more" when he can.

What has impressed Mr Yuill most has been the low rate of tyre wear on the Indair equipped trailers — over 30,000 miles from a set of 15R-22.5 wide singles compared with the normal 20,000 miles maximum he now expects on a steel suspended semi-trailer.

He has not yet made any tyre life comparisons between the Indair and any other type of air suspension, but Rubery OwenRockwell is confident that if any such test were conducted today its product would come out on top.

As the name suggests, Indair is an independent suspension. Instead of the usual single-axle beam for each pair of wheels it employs a half RO-R beam, welded to a trailing arm which pivots on two rubber bushes, for each wheel.

RO-R claims reduced tyre wear, from shock loads and scrub, as one of the major advantages of the independent suspension design over a conventional air system. The argument is that in a tight turn — when a laden tri-axle bogie is pivoting on its centre axle and the tyres on the front and rearmost axles are being severely scrubbed — 'a conventional air suspension, with its relatively high roll centre, will cause a large proportion of each axle load to be transferred to the outer wheel.

The lndair's roll centre is at ground level, says Rubery Owen, and tyre scrub damage is reduced because the axle load is divided equally between the wheels, even in the tightest turn. Tyre wear resulting from shock loads caused by road bumps will also be less with an independent suspension, according to lndair's manufacturer. This is because each air spring reacts only to the load on one wheel, giving a softer suspension than when two air springs are linked by a rigid axle beam.

The idea of independent air suspension for semi-trailers is not new. Chris Hudson used a Dunlop designed system on his monoframe trailer of the Seventies and Rubery OwenRockwell itself offered the original Indair suspension in 1981. That suspension was designed by Zwalve of the Netherlands and, following RO-R's acquisition of this company's suspension business, around 400 units were sold — almost all to Dutch operators, though a few went to Germany.

The idea never caught on in this country, largely because the suspension was too heavy. One of the major objectives of the redesign of the suspension was to make it more competitive on weight. The latest Indair is about 10 per cent lighter than its predecessor, the greatest part of this weight saving stemming from a thorough redesign of the crossmember which supports the trailing arm pivots.

On the first lndair this component was a hefty, rectangular section one. The latest is lighter and has a truncated diamond shaped section. Weight has also been saved by modifying the shape of the trailing arms.

The weight of each suspension will vary according to ride height (unusually, RO-R offers a choice of nine, from 250 to 450mm) and according to the design axle load and brake width. A typical weight for a single-axle Indair, however, is 535kg. That is for a 10.5 tonne rated axle with 420 x 180mm brake drums, but not including brake chambers and slack ad

justers, and with a 250mm ride height.

The equivalent weight for the original Indair would have been about 675kg. RO-R also points to the additional weight saving a trailer builder can make when using Indair by using the suspension's crossmember to help provide the chassis frame's torsional stiffness.

The trailer maker's needs in general have been kept very much in mind in the design of this suspension. RO-R knew it had to be easy to fit to the semi-trailer chassis if the manufacturers were to be won over. Hence, the mounting of the levelling valves and the top of the dampers on the suspension crossmember so that the trailer builder simply has to fix the complete Indair assembly to his chassis, Neither does he have to worry about setting camber and toe-in. These are set at RO-R's North Wales factory before each suspension is despatched. one deg camber and a toe-in of 0 to 1/2 deg).

Another feature of Indair designed to appeal to trailer manufacturers is the piping kit with which it is supplied. The piping is made of rubber instead of the more common plastic which can kink if it is bent through too small a radius and needs careful fitting.

Indair is not cheap. An operator can expect to _pay about £300 per axle more for it than for a conventional tapered leaf steel suspension. But Rubery Owen is confident that many operators, certainly including those running tipping semi-trailers, will find that the advantages of its novel suspension make its cost justifiable.

The standard Indair specification includes Rockwell Anchorlok spring brake chambers and Rockwell Paymaster automatic slack adjusters as well as the Koni dampers. These are adjusted at the factory to suit the work the trailer will be engaged in and are colour coded — red for light duty, yellow for medium, and black for heavy duty.

The suspension should require virtually no routine maintenance. The dampers are expected to have at least a fiveyear life, and there are no lubrication points on the suspension apart from a single grease nipple on the lifting version. And there are no U bolts to require regular tightening on Indair.

In the development of its latest suspension Rubery Owen-Rockwell included extensive fatigue, stability and ride tests at MIRA, the Motor Industry Research Association and, more recently, on site with a tipper. The company now has no doubt that the lower unsprung mass of the independent suspension and isolation of each wheel from the others gives a marked improvement in ride quality over non-independent air suspensions, particularly on lightly laden trailers.

An independent MIRA test of the roll stability and lateral acceleration characteristics of an Indair equipped fully laden triaxle semi-trailer on a 33m radius circle revealed that its roll angles were about average while the lateral acceleration reached before a wheel lifted was above average, at 0.34g.

At present Indair is available only with wide single tyres, 16.5 R22.5, 15R 22.5 or F20 Pilote, but RO-R will have a twin wheel version, with the air bags moved inboard a little to accommodate the extra tyre width, ready later this year. Improved roll stability is being worked on, too, and the trailing arm pivot bushes are likely to be made less compliant soon