Another Two B.E.T. Companies tsk for More : Oldham Fares Up 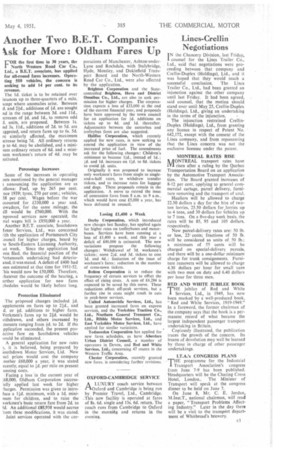 Page 39, 4th May 1951 — Another Two B.E.T. Companies tsk for More : Oldham Fares Up
Close
Noticed an error?
If you've noticed an error in this article please click here to report it so we can fix it.
Keywords : Fare, Pricing, Transit Pass, Nottingham Corporation Tramways, Business / Finance

rOR the first time in 30 years, the North Western Road Car Co., Ltd., a B.E.T. associate, has applied for all-round fares increases. Operating 550 vehicles, the concern is seeking to add 14 per cent. to its revenue.

The Id. ticket is to be retained over istances up to three-quarters of a mile, Kcept where anomalies arise. Between d. and 20., additions of id. are sought nd in the range between 3d. and 11d., icreases of Id. and Id., to remove odd 1. units, are proposed. Between Is. nd 3s. lid., additions of 2d. to 5{1. are "nested, and return fares up to 6s. 5d. re similarly affected, the maximum tcrease being 7d. All ordinary returns p to 4d. may be abolished, and a minimm ordinary return of 6d. and a minitam workmen's return of 4d. may be istituted.

announcing the application are as allows: Fuel, up by 265 per cent. nee 1939; tyres, 270 per cent.; vehicles, 38 per cent. Wages before the war ccounted for £330,000 a year and, owadays, for the same mileage, the cill would be £760,000. With the nproved services now operated, the ttal wages bill is £950,000 a year. . Another B.E.T. associate, Southdown lotor Services, Ltd., was concerned ith the application of Portsmouth City :ouncil for higher charges, heard by le South-Eastern Licensing Authority, tst week. Since the application had een filed, the financial position of the 'ortsmouth undertaking had deterioated, it was stated. A deficit of £400 had een estimated at that time for 1951-52. his would now be £.50,000. Therefore, /hatever the outcome of the hearing, a Luther application" for new fares chedules would be likely before long.

The prbposed changes included d. upplements on fares up to 23(1., and d. or id. additions to higher fares. Vorkmen's fares up to 23d. would be vithdrawn, and others increased by mounts ranging from id, to 2d. If the pplication succeeded, the present proective fare on Southdown. vehicles vould be eliminated.

A general application for new rates s, it is believed, being prepared by iouthclown Motor Services, Ltd. New uel prices would cost the company nother £60,000 a year, it was stated ecently, equal to id. per mile on present unning costs.

Facing a loss in the current year of 68,000, Oldhatn Corporation successoily applied last week for higher .harges. Permission was given to introInce a lid, minimum, with a Id. mininum for children, and to raise the vorkmen's basic return fare from 2d. to Id. An additional £85,938 would accrue 'rom these modifications, it was stated. Joint services operated with the cor

porations of Manchester, Ashton-underLyne and Rochdale, with Stalybridge, Hyde, Mossley, and Dukinfield Transport Board and the North-Western Road Car Co., Ltd., were also affected by the application.

Brighton Corporation and the State-. controlled Brighton, Hove and District Omnibus Co., Ltd., arc also to seek permission for higher charges. The corporation expects a loss of £33,000 at the end of the current financiaf year, and proposals have been approved by the town council for an application for„Id. additions on tickets up to 4d. and ld, thereafter. Adjustments between the motorbus and trolleybus fares are also suggested.

Halifax Corporation, which recently applied for new rates, is now seeking to amend the application in view of the increased price of fuel. The amendments ask for the following changes: Children's minimum to become lAd., instead of Id.; 1d. and Id. increases on Ild. to 8d. tickets to avoid id. units.

Originally it was proposed to increase only workmen's fares from single to singleand-a-half rates, to withdraw transfer tickets, and to increase rates for luggage and dogs. These proposals remain in the application. A move to extend the issue of concession fares from 8 a.m. to 9 a.m., which would have cost £5,000 a year, has been defeated in council.

Losing £1,400 a Week Derby Corporation, which introduced new charges last Sunday, has applied again for higher rates on trolleybuses and motorbuses. Services have been running at a loss of £1,400 a week, and this year a deficit of £40,000 is estimated. The new variations propose the following changes: Withdrawal of 3d. workmen's tickets; some 21d. and 3d. tickets to cost 3d. and 4d.; limitation of the issue of workmen's fares; reduction in the number of cross-town tickets.

Bolton Corporation is to reduce the frequency of certain services to offset the effect of rising costs. A sum of £4,284 is expected to be saved by this move. These reductions affect off-peak services, but a further rise in costs might result in cuts in peak-hour services.

Todmorden Corporation has applied for new fares schedules, as have Aberdare Urban District Council, a number of operators in Devon, and Red and White Services, Ltd., concerning 47 routes in the Western Traffic Area.