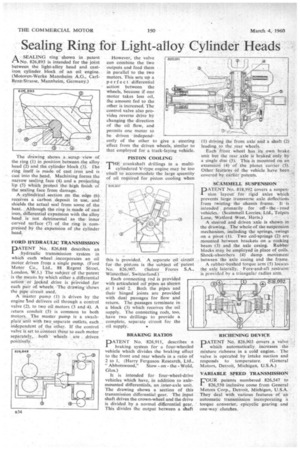 Page 82, 4th March 1960 — .. Seajitig Ripg . :fot Light-ailby . Cylinder .•-•floadS A SEALING ring shown in patent
Close
Noticed an error?
If you've noticed an error in this article please click here to report it so we can fix it.

No. 826,893 is intended for the joint between the light-alloy head and castiron cylinder block of an oil engine. (Motoren-Werke Mannheim A.G., CadBenz-Strasse, Mannheim, Germany.) The drawing shows a . scrapview ol. the ring (1) in Position between the alloy head (2) and the cylinder block (3). The ring itself is made of cast iron and is cast into the head. Machining forms the narrow sealing face (4) and a projecting lip (5) which: protect the high finish of the .sealing face from damage. .

A cylindrical section on the edge (6) receives a carbon deposit in use, and shields the actual seal from some of the heat. Although the -ringis made of cast iron, differential expansion with the alloy head is not detrimental as the' inner curved surface (7) of the ring is cornpre...4sed by the expansion of the cylinder head.

PATENT No. 826,848 describes an hydraulic transmission system in which each wheel -incorporates an oil motor driven from a single pump. (Ford Motor Co., Ltd., 88 Regent Street. London, W.I.) The subjectof the patent is the means by which either a differential action • or locked _drive is provided for each pair of. wheels. The drawingshaws

A Mister pump (1) is driven by the engine Ind delivers oil through a control valve (2), to two oil motors (3 and 4). A return conduit (5) is common to both motors..,The master pump is a swashplate'Unit with two separateoutlets, each independent of the other. If the control valve is set to.,COnnect these to each motor separatelv, . both wheels are , driven positively.

However, the valve can combine the two outputs and feed them in parallel to the two motors. This sets up a perfect differential action between the wheels, because if one motor takes less oil, the amount fed to the other is increased. The control valve also provides reverse drive by changing the direction of the oil flow, and permits one motor to be driven • independently of the other to give a steering effect from the driven wheels, similar to that employed for a track-laying vehicle.

THE crankshaft drillings in a multi'. cylindered V-type engine may be too small to accommodate the large quantity of oil required for piston cooling when

this is provided. A separate oil circuit for the pistons is the subject of patent No. 826,907. (Sulzer Freres S.A.,

pATENT No. -826,911, describes a braking system for a four-wheeled vehicle which divides the braking effect to the front and rear wheels in a ratio of 2 to I, (Harry Ferguson Research, Ltd., " Abbotswood," Stow on the Wold, Glos.)

It is intended for four-wheel-drive vehicles which have, in addition to axlemounted differentials, an inter-axle unit. The drawing shows a section of this transmission differential gear. The input shaft drives the crown-wheel and the drive is divided by a normal differential gear. This divides the output between a shaft (I) driving the front axle and a shaft (2) leading to the rear wheels.

Each front wheel has its own brake . unit but the rear .axle is braked only, by a single disc (3): This is mounted on an extension (4) of the planet carrier (5). Other features Of the vehicle have been

A steered and driven axle is shown in the drawing. The whole of the suspension mechanism, including the springs, swings on a pivot (1). Two coil-springs (2) are mounted between brackets on a rocking beam (3) and the axle casing. Rubber blocks may be employed in place of coilsShock-absorbers (4) damp movement between the axle casing and the frame.

PATENT No. 826,903 covers a valve whieh automatically increases the .• mixture richness in a cold engine. The valve is operated by intake suction and responds to temperature. (General Motors, Detroit, Michigan, U.S.A.)