No Ministry Aid for Drivers' Competition 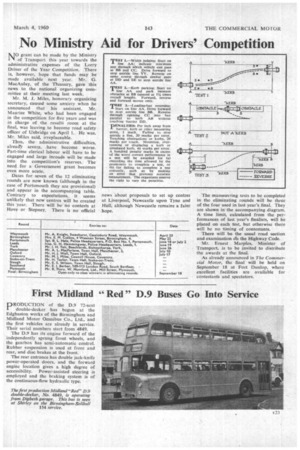 Page 65, 4th March 1960 — No Ministry Aid for Drivers' Competition
Close
Noticed an error?
If you've noticed an error in this article please click here to report it so we can fix it.
Keywords : Marples

N° grant can be made by the Ministry of Transport this year towards the administrative expenses of the Lorry Driver of the Year Competition. There is, however, hope that funds may be made available next year. Mr. G. MacAulay, of the reasury, gave this news to the national organizing committee at their meeting last week.

Mr. M. J. Miles, honorary organizing secretary, caused some anxiety when he announced that his assistant, Mr. Maurice White, who had been engaged in the competition for five years and was in charge of the resuW room at the final, was leaving to become road safety officer of Uxbridge on April 1. He was, Mr. Miles said, irreplaceable.

Thus, the administrative difficulties, alread'Y severe, have become worse. Part-time clerical labour will have to be engaged and large inroads will be made into the competition's reserves. The need for a Government grant becomes even more acute.

Dates for seven of the 12 eliminating rounds are now known (although in the case of Portsmouth they are provisional) and appear in the accompanying table. Contrary to expectations, it seems unlikely that new centres will be created this year. There will be no contests at Hove • or Stepney. There is no official news about proposals to set up centres at Liverpool, Newcastle upon Tyne and Hull, although Newcastle remains a faint hope. The manceuvring tests to be completed in the eliminating rounds will be three of the four used in last year's final. They are shown in the accompanying diagram. A time limit, calculated from the performances of last year's finalists, will be placed on each test, but otherwise there will be no timing of contestants.

There will be the usual road section and examination ern the Highway Code.

Mr. Ernest Marples, Minister of Transport, is to be invited to distribute the awards at the final

As already announced in The Commercial Motor, the final will be held on September 18 at Fort Dunlop, where excellent facilities are available for contestants and spectators.