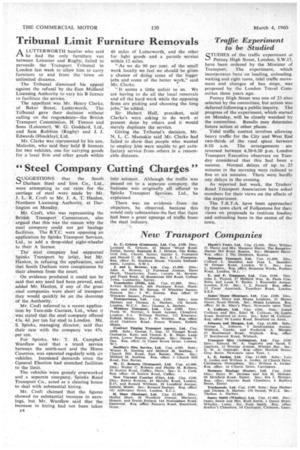 Page 46, 4th March 1960 — "Steel Company
Close
Noticed an error?
If you've noticed an error in this article please click here to report it so we can fix it.
Keywords : Construction, Steel, Steelmaking, Spinks, Business / Finance

Cutting Charges" SQUGGESTIONS that the South Durham Steel and ho n Co., Ltd., were attempting to• cut• rates for the carriage of steel were made by Mr. J. L. R. Croft to Mr. J. A. T:-Hanlon, Northern Licensing Authority, at Darlington on Monday.

Mr. Croft, who was representing the British Transport Commission, also argued that this was the reason why the steel company could not get haulage facilities. The B.T.C. were opposing an . application by Spinks Transport Services, -Ltd., to add a drop-sided eight-wheeler

to their A licence. '

The steel company had supported Spinks Transport by letter, but Mr. Hanlon, in refusing the application, said that South Durham were conspicuous by their absence from the court On evidence produced it could not be • said that any need had been proved, and, added Mr. Hanlon, if any of the great steel companies were short of transport they would quickly be on the doorstep • . of the Authority. .

• Mr. Croft referred to a recent applicationby Tees-side Carriers, Ltd., when it .was stated that the steel company offered , 43s. 4d. per ton for steel to London. Mr. S. Spinks, nianaging director, said that their rate with the company was 45s.

• per ton. • For Spinks, Mr. T. H. Campbell Wardlaw said that a trunk service between the north-east and the Home Counties, was operated regularly with aix vehicles. Increased demands since the General Election had stretched facilities to the limit.

The vehicles were grossly overwork,...d and .a separate company, Spinks Road Transport Co., acted as a clearing house to deal with substantial hiring.

Mr. Croft claimed that the figures showed no substantial increase in earnings, but Mr. Wardlaw said that the increase in hiring had not been taken E4 into account. Although the traffic was passed on to a separate company, the business was originally all offered to Spinks Transport Services, Ltd., he explained.

There was no evidence from the objectors, he observed, because this would only substantiate the fact that there had been a great upsurge of traffic from the steel industry.