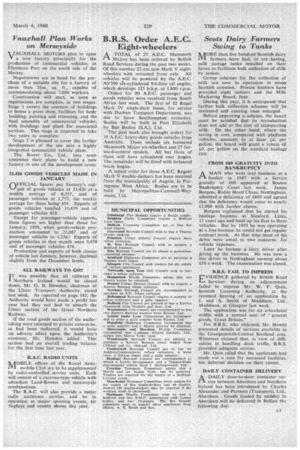 Page 45, 4th March 1960 — Scots Dairy Farmers Swing to Tanks
Close
Noticed an error?
If you've noticed an error in this article please click here to report it so we can fix it.
Keywords :

MORE than five hundred Scottish dairy farmers have had, or are having,

milk storage tanks installed on their farms to facilitate bulk collection of rriilk by tanker.

Group schemes for the collection of milk are now in operation in seven Scottish counties. Private hauliers have provided eight tankers and the Milk Marketing Board, four.

During this year, it is anticipated that further bulk collection schemes will be instituted and existing ones enlarged.

Before approving a scheme, the board must be satisfied that its introduction does not add to the cost of transporting milk. On the other hand, where the saving in cost, compared with platform vehicles, amounts to at least id. per gallon, the board will grant a rebate of id. per gallon on the standard haulage rate.

FROM £60 GRATUITY INTO BANKRUPTCY

AMAN who went into business as a haulier in 1947 with a Service gratuity of £60 appeared at Boston Bankruptcy Court last week. James Burgess, Robin Hood Chase, Nottingham, admitted a deficiency of £899 and agreed that his deficiency would come to nearly £1,000 with further claims.

Burgess explained that he started his haulage business at Sleaford, Lines, 13 years ago and built up his fleet to three vehicles. But by 1955 he was operating at a loss because he could not get regular contract .work. At that time most of his debts were owed to two concerns for vehicle expenses.

Later he became a lorry driver after giving up the business. He was now a bus driver in Nottingham earning about £10 a week. The examination was closed.

EVIDENCE gathered by British Road I-4 Services during an adjournment failed to impress Mr. W. F. Quin, Scottish Licensing Authority, at the resumed hearing of an application by J. and A. Smith of Maddison, Ltd., Maddison, at Glasgow last week. The application was for six articulated outfits with a normal user of "general goods, Great Britain." For B.R.S., who objected, Mr. Howitt presented details of services available in the Grangemouth-Central Scotland area. Witnesses claimed that, in view of difficulties in handling dock traffic, B.R.S. provided adequate service.

Mr. Quirt ruled that the applicants had made out a case for increased facilities, but deferred decision on their extent.

ADAILY door-to-door container service between Aberdeen and Northern Ireland has been introduced by Charles Alexander and Partners (Transport). Ltd., Aberdeen. Goods loaded by midday in Aberdeen will be delivered in Belfast the following day.