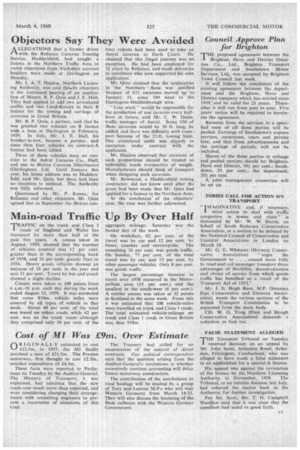 It will follow the conclusion of the existing agreement between the department and the Brighton, Hove and District company which has existed since 1939, and be valid for 21 years. Thereafter it will run from year to year. Five years' notice will be required to terminate the agreement.

Revenue from the services in a specified zone of all three parties will be pooled. Earnings of Southdown's express services, excursions, tours and private hire, and that from advertisements and the carriage of parcels, will not be Shares of the three parties in mileage and pooled receipts should be: Brighton, Hove and District, 501 per cent.; Southdown, 29 per cent.; the department, 20 per cent.

A joint management committee will be set up.

TORIES CALL FOR ACTION ON TRANSPORT " IMAGINATIVE and, if necessary, I strict action to deal with traffic congestion in towns and cities" is demanded by Mr. W. W. Harris, on behalf of South Battersea Conservative Association, in a motion to be debated by the National Council of Conservative and Unionist Associations in London on March 18.

vative Association) -"urges the Government to . . extend more fully to road and rail passenger transport those advantages of flexibility, decentralization and choice of service from which goods traffic has benefited as a result of the Transport Act of 1953."

THE Transport Tribunal on Tuesday reserved decision on an appeal by Mr. John Scott, Arlecdon Road, Alicedon, Frizington, Cumberland, who was alleged to have made a false statement in an application for a special-A licence.

His appeal was against the revocation of the licence by the Northern Licensing Authority in November, 1958. The Tribunal, in an interim decision last July, had referred the matter back to the Authority for further investigation.

For Mr. Scott, Mr. r. H. Campbell Wardlaw said that it was clear that the appellant had acted in good faith.