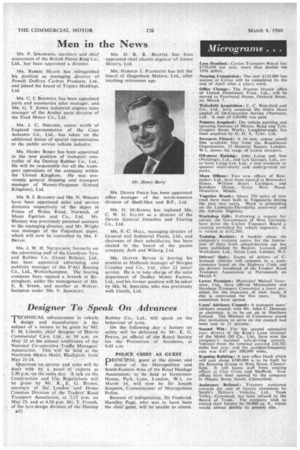 Page 36, 4th March 1960 — Men in the News
Close
Noticed an error?
If you've noticed an error in this article please click here to report it so we can fix it.
Keywords : Business / Finance

MR. P. SPRAWSON, secretary and chief accountant of the British Piston Ring C.o.-, Ltd., has been appointed a director.

MR. BARRIE HEATH has relinquished his position as managing director of Powell Duffryn Carbon Products, Ltd., and joined the board of Triplex Holdings, Ltd.

MR. J. C. NiELSEN, senior Mirth of England representative of the Cape Asbestos Co., Ltd,; has taken on the additional duties of special representative to the public service vehicle industry.

MR. HENRY BERRY has been appointed to the new position of transport 'controller of the Dunlop Rubber Co., Ltd., He will be responsible for all the transport operations of the company within the United . Kingdom. He was previously general shipping and .transport manager of MasseysFerguson (United Kingdom), Ltd.

MR. B. J. BLEANEY and MR. N. %skullhave been appointed sales and service directors respectively of the depot in Prince of Wales Road, Norwich, of Mann Egerton and Co., Ltd. Mr. Bleaney was previously personal assistant to the managing director, and Mr. Wright was manager of the Fakenham depot, which will now be controlled by Ma. F.

MR. J. W. H. NICHOLSON, formerly on the advertising staff of the Goodyear Tyre and Rubber Co. (Great Britain), Ltd., has been appointed advertising and publicity manager of the F'AG Bearing Co., Ltd., Wolverhampton. The bearing company have opened a branch at BIN. mingham, under the management of MR.

E. B. STEER, and another at Wolverhampton under MR. V. SEDGELEY. MR. D. K. R. BEATTIE has been appointed chief chassis engineer of Jensen , Motors, Ltd.

MR. HAROLD J. PLUNKETT has left the board of Dagenham Motors, Ltd., after reaching retirement age.

MR. DENYS FIELD has been appointed office manager of the north-western division of Shell-Mex and B.P., Ltd.

MR. F. C. HALL, managing director of General and Industrial Paints, Ltd., and chairman of their subsidiaries, has been elected to the board of the parent company, Ault and Wiborg, Ltd.

MR. OLIVER BEVAN is leaving his position as Midlands manager of Morgan Crossley and Co., Ltd., after 22 years' service. He is to take charge of the sales department of Dudley Motor Factors, Ltd., and his former position will be taken by MR. M. SHELDON, Who was previously with Gandy, Ltd.