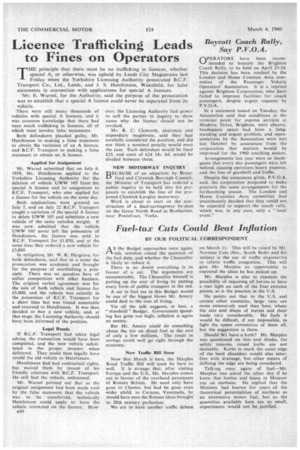 Page 34, 4th March 1960 — Licence Trafficking Leads to Fines on Operators
Close
Noticed an error?
If you've noticed an error in this article please click here to report it so we can fix it.
Keywords : Regional Transport Office, Law / Crime

THE principle that there must be no trafficking in licences, whether special A, or otherwise, was upheld by Leeds City Magistrates last Friday when the Yorkshire Licensing Authority prosecuted B.C.F. Transport Co., Ltd., Leeds, and J. S. Hutchinson, Wakefield, for false statements in connection with applications for special A licences.

I'vtr. E. Wurzel, for the Authority, said the purpose of the prosecution was to establish that a special A licence could never be separated from its vehicle.

There were still many thousands of vehicles with special A licences, and it was common knowledge that there had been much trafficking in licences, all of which must involve false statements.

Applied for Assignment Mr. Wurzel submitted that on July 6, 1959, Mr. Hutchinson applied to the Yorkshire Licensing Authority for the deletion of vehicle UWW 105 from his special A licence and its assignment to B.C.F. Transport, who also applied for a licence for the vehicle on the same day.

Both applications were granted on July 7, and on July 22 B.C.F. Transport sought a variation of the special A licence to delete UWW 105 and substitute a new vehicle of the same unladen weight. It was now admitted that the vehicle UWW 105 never left the possession of Hutchinson, the licence was sold to B.C.F. Transport for £1,850, and at the same time they ordered a new vehicle for £3,800.

In mitigation, Mr: W, R. Hargrave, for both defendants, said that in a sense the prosecution was academic and brought for the purpose of establishing a principle. There was no question here of unfair competition with other hauliers. The original verbal agreement was for the sale of both vehicle and licence for £5,000, and the vehicle was actually in the possession of B.C.F. Transport for a short time but was found unsuitable and returned to Hutchinson. It was then . decided to buy a new vehicle, and, at that stage, the Licensing Authority should have been informed of the position.

If B.C.F. Transport had taken legal advice, the transaction would have been completed, and the new vehicle substituted in the proper manner when delivered. They could then legally have resold the old vehicle to Hutchinson.

Hutchinson had had contractual rights, but waived them by reason of his friendly relations with B.C.F. Transport. He still had the vehicle, unlicensed, Mr. Wurzel pointed out that as the original assignment had been made void by the false statement that the vehicle was to be transferred, technically Hutchinson could apply to have the vehicle reinstated on the licence. How B30 ever, the Licensing Authority had power to call the parties to inquiry to show cause why the licence should not be revoked.

Mr. R. C. Cleworth, chairman and stipendiary magistrate, said they had carefully considered the position, and did not think a nominal penalty would meet the case. Each defendant would be fined £25. and costs of £24 I4s. 6d. would be divided between them.

NEW MOTORWAY INQUIRY 11Q ECAUSE of an objection by BrentI-) ford and Chiswick Borough Council, the Minister of Transport has ordered a public inquiry to be held into his proposals to establish the line• of the proposed Chiswick-Langley motorway.

Work is about to start on the construction of a dual-carriageway by-pass on the Great North Road at Brotherton, near Pontefract, Yorks.