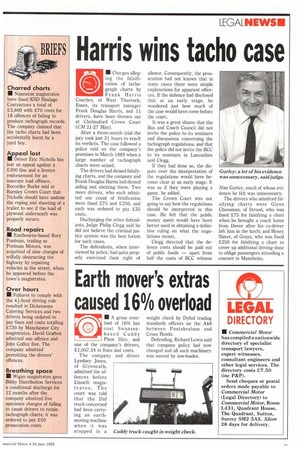 a total of £3,600 with £70 costs for 18 offences of failing to produce tachograph records. The company claimed that the tacho charts had been accidentally burnt by a yard boy.

Appeal lost 111 Driver Eric Nicholls has lost an appeal against a £200 fine and a licence endorsement for an insecure load offence. Recorder Burke said at Burnley Crown Court that Nicholls should have undone the roping and sheeting of a trailer to see if the load of plywood underneath was properly secure.

Road repairs • Eastbourne-based Rory Poolman, trading as Poo'man Motors, was acquitted of nine charges of wilfully obstructing the highway by repairing vehicles in the street, when he appeared before the town's magistrates.

Over hours • Failures to comply with the 41-hour driving rule resulted in Dickensons Catering Services and two drivers being ordered to pay fines and costs totalling £730 by Manchester City magistrates. David Grafton admitted one offence and John Coffey five. The company admitted permitting the drivers' offences.

Breathing space • Wigan magistrates gave Bibby Distribution Services a conditional discharge for 12 months after the company admitted five specimen charges of failing to cause drivers to retain tachograph charts; it was ordered to pay £50 prosecution costs.