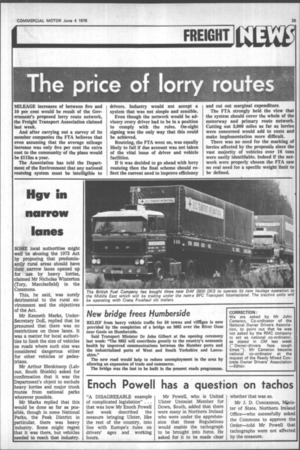 Page 27, 4th June 1976 — Hgv in narrow lanes
Close
Noticed an error?
If you've noticed an error in this article please click here to report it so we can fix it.
Keywords : Types Of Roads, Highway, Lane, Truck, Politics

SOME local authorities might well be abusing the 1973 Act by proposing that predominantly rural areas should have their narrow lanes opened up for use by heavy lorries, claimed Mr Nicholas Winterton (Tory, Macclesfield) in the Commons.

This, he said, was surely detrimental to the rural environment and the objectives of the Act.

Mr Kenneth Marks, UnderSecretary DoE, replied that he presumed that there was no restrictions on those lanes. It was a matter for local authorities to limit the size of vehicles on roads where such size was considered dangerous either for other vehicles or pedestrians.

Mr Arthur Blenkinsop (Labour, South Shields) asked for confirmation that it was the Department's object to exclude heavy lorries and major trunk routes from national parks wherever possible.

Mr Marks replied that this would be done as far as possible, though in some National Parks, the Peak District in particular, there was heavy industry. Some might regret that it was there, but vehicles needed to reach that industry.