Power in plenty for electric vehicles 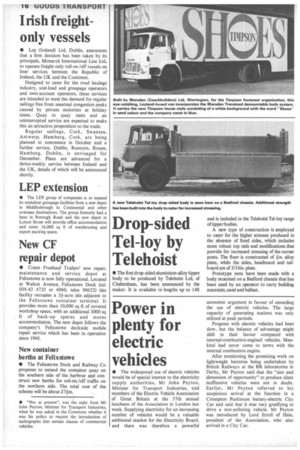 • The widespread use of electric vehicles would be of special interest to the electricity supply authorities, Mr John Peyton, Minister for Transport Industries, told members of the Electric Vehicle Association of Great Britain at the 37th annual luncheon of the Association in London last week. Supplying electricity for an increasing number of vehicles would be a valuable additional market for the Electricity Board, and there was therefore a powerful

economic argument in favour of extending the use of electric vehicles. The large capacity of generating stations was only utilized at peak periods.

Progress with electric vehicles had been slow, but the balance of advantage might shift in their favour compared with internal-combustion-engined vehicles. Mankind had never come to terms with the internal combustion engine.

After mentioning the promising work on lightweight batteries being undertaken by British Railways at the BR laboratories in Derby, Mr Peyton said that the "size and dimension of opportunity" to produce silent inoffensive vehicles were not in doubt. Earlier, Mr Peyton referred to his auspicious arrival at the function in a Crompton Parkinson battery-electric City Car and said that it was very gratifying to drive a non-polluting vehicle. Mr Peyton was introduced by Lord Erroll of Hale, president of the• Association, who also arrived in a City Car.