The Bath and West of England Show. 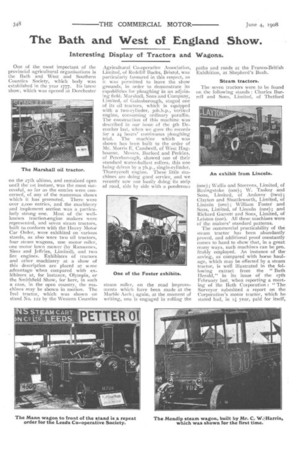 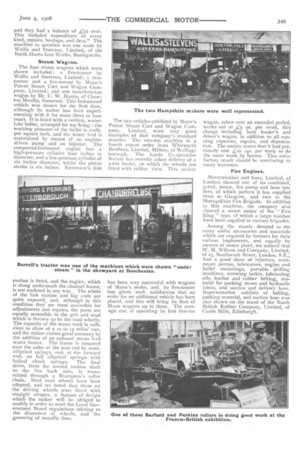 Interesting Display of Tractors and Wagons.

One of the most important of the provincial agricultural organisations is the Bath and West and Southern Counties Society, which body was established in the year 1777. Its latest show, which was opened at Dorchester

on the 27th ultitno, and remained open until the Isl. instant, was the most successful, so far as the entries were concerned, of any of the numerous shows which ii has promoted. There were over 2,000 entries, and the machinery and implement section was a particularly strong one. Most of the wellknown traction-engine makers were represented, and seven steam tractors, built to conform with the Heavy Motor Car Order, were exhibited on various stands, as also were two oil tractors, four steam wagons, one motor roller, one motor lawn mower (by Ransomes, Sims and Jeffries, Limited), and two fire engines. Exhibitors of tractors and other machinery at a show of this description are placed at some advantage when compared with exhibitors at, for instance, Olympia, or the Smithfield Show, for here, in such a case, in the open country, the machines may be shown in motion. The Ivel tractor, which was shown on stand No. 122 by the Western counties

Agricultural Co-operative Association, Limited, of Redeliff Backs, Bristol, was particularly favoured in this respect, as it was permitted to leave the show grounds, in order to demonstrate its capabilities for ploughing in an adjoining field. Marshall, Sons and Company, Limited, of Gainsborough, staged one of its oil tractors, which is equipped with a two-cylinder, 3ob.h.p., vertical engine, consuming ordinary paraffin. The construction of this machine was described in our issue of the 5th December last, when we gave the records for a 24 hours' continuous ploughing trial. The machine which was shown has been built to the order of Mr. Morris F. Candwell, of West Hagbourne. Messrs. Barford and Perkins, of Peterborough, showed one of their standard water-ballast rollers, this one being driven by a 7h.p., single-cylinder, Thornycroft engine. These little machines are doing good service, and we recently saw one busily doing its strip of road, side by side with a ponderous

steam roller, on the road improvements which have been made at the Marble Arch ; again, at the moment of writing, one is engaged in rolling the

paths and roads at the Franco-British Exhibition, at Shepherd's Bush.

The seven tractors were to be found on the following stands : Charles Burrell and Sons, Limited, of Thetford

The commercial practicability of the steam tractor has been abundantly proved, and additional proof constantly comes to hand to show that, in a great many ways, such machines can be pro_ fitably employed. An instance of the saving, as compared with horse haulage, which may be effected by a steam tractor, is well illustrated in the following extract from the " Bath Herald," in its issue of the 17th February last, when reporting a meeting of the Bath Corporation : " The Surveyor submitted a report on the Corporation's motor tractor, which he stated had, in i year, paid for itself,

and they had a balance of £72 over. This included expenditure of every kind, repairs, haulage, and tires." The machine in question was one made by Wallis and Steevens, Limited, of the North Hants Iron Works, Basing-stoke.

The four steam wagons Which were shown included : a five-tonner by Wallis and Steevens, Limited ; a twotonner and a five-tonner by Mann's Patent Steam Cart and Wagon -Company; Limited; and one two-three-ton wagon by Mr. C. W. Harris, of Chewton Mendip, Somerset. This last-named vehicle was shown for the first time, although its maker has been experimenting with it for some three or four years. It is fitted with a vertical, watertube boiler, arranged for top firing : the working pressure of the boiler is 200lb. per square inch, and the water feed is maintained by means of an enginedriven pump and an injector. The compound-horizontal engine has a high-pressure cylinder four inches in diameter, and a low-pressure cylinder of six inches diameter, whilst the piston stroke is six inches. Stevenson's link

motion is fitted, and the engine, which is slung underneath the channel frame, is not enclosed in any way. The whole of the link motion and big ends are quite exposed, and, although in this condition they are most accessible for adjustments and repairs, the parts are equally accessible to the grit and mud which is thrown up by the road wheels. The capacity of the water tank is suffi_ cient to allow of a to to is miles' run, and the maker claims great economy by the addition of an exhaust steam feed water heater. The frame is mounted over the axles at the rear end by semielliptical springs, and, at the forward end, on full elliptical springs with helical check springs. The final drive, from the second motion shaft to the live back axle, is transmitted through a Brampton's roller chain. Steel road wheels have been adopted, and we noted that those on the driving wheels were fitted with straight stropes, a feature of design which the maker will be obliged to modify in order to meet the Local Government Board regulations relating to the diameters of wheels, and the grooving of metallic tires.

The two vehicles exhibited by Mann's Patent Steam Cart and Wagon Company, Limited, were very good examples of that company's standard practice. The two-ton machine is a fourth repeat order from Whitworth Brothers, Limited, Millers, of Wellingborough. The Leeds 0-operative Society has recently taken delivery of a 2-ton model, on which the wheels are fitted with rubber tires. This society

has been very successful with wagons of Mann's make, and, its five-tonner has given such satisfaction that an order for an additional vehicle has been placed, and this will bring its fleet of Mann Wagons up to three. The average cost of operating its first five-ton

wagon, taken over an extended period, works out at ,L-s 9s.per week, this charge including both loader's and driver's wages, in addition to all running expenses, repairs, and depreciation. The society states that it had pre_ viously cost 0 14s. per week to do the same work by horses. This satisfactory result should be convincing to many waverers.

Merryweather and Sons, Limited, of London, showed one of its combined, pctrol, motor, fire pump and hose tenders, of which pattern it has supplied three to Glasgow, and two to the Metropolitan Fire Brigade. In addition to this machine, the company also showed a steam motor of the " Fire Ring " type, of which a large number have been supplied to various brigades.

Among the stands devoted to the many useful accessories and materials which are required by farmers for their various implements, and equally by owners of motor plant, we noticed that W. H. Willcox and Company, Limited, of 23, Southwark Street, London, S.F.,. had a good show of injectors, semirotary pumps, lubricators, engine and boiler mountings, portable drilling machines, screwing tackle, lubricating oils, leather and rubber belting, material for packing steam and hydraulic joints, and suction and delivery hose. Representative exhibits of belting, packing material, and suction hose was also shown on the stand of the North British Rubber Company, Limited, of Castle Mills, Edinburgh.