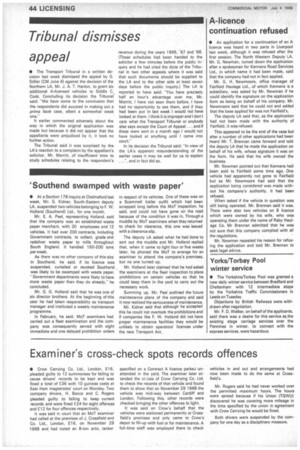 • The Transport Tribunal in a written decision last week dismissed the appeal by G. Stiller (CM June 6) against the decision of the Northern LA, Mr. J. A. T. Hanlon, to grant six additional A-licensed vehicles to Siddle C. Cook. Concluding its decision the Tribunal said: "We have come to the conclusion that the respondents did succeed in making out a prima fade case, albeit a somewhat weak one.

It earlier commented adversely about the way in which the original application was made but because it did not appear that the appellants were prejudiced by it, it took no further action.

The Tribunal said it was surprised by the LA's reaction to a complaint by the appellant's solicitor, Mr. Merritt, of insufficient time to study schedules relating to the respondent's

revenue during the years 1966, '67 and '68. (These schedules had been handed to the solicitor a few minutes before the public inquiry and he had cited the dicta of the Tribunal in two other appeals where it was said that such documents should be supplied to the LA and to the other side at least seven days before the public inquiry.) The LA is reported to have said: -You have precisely half an hour's advantage over me, Mr. Merritt. I have not seen them before. I have had no opportunity to see them, and if they had been put in last week I would not have looked at them. I think it is improper and I don't care what the Transport Tribunal or anybody else says except the Court of Appeal .. and if these were sent in a month ago I would not have looked at anything until I came into court."

In its decision the Tribunal said: ''In view of the LA's apparent misunderstanding of the earlier cases it may be well for us to explain ...", and in fact did so.