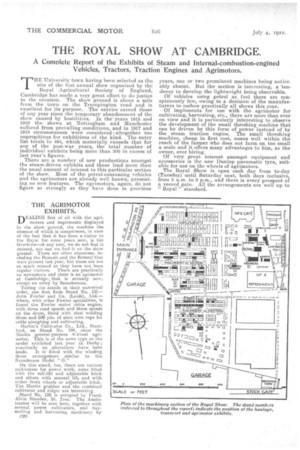 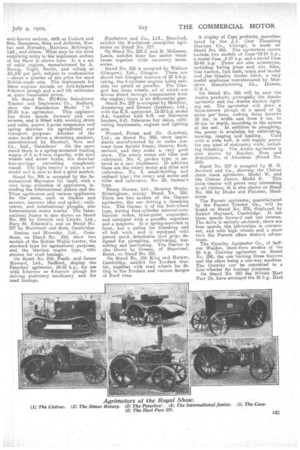 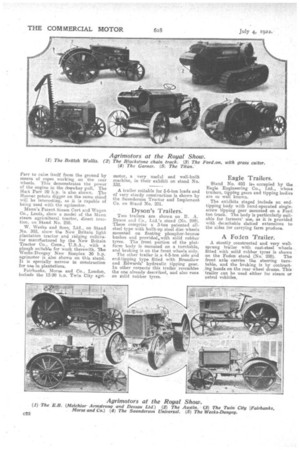 DEALING first of all with the agrimotors and implements displayed in the show ground, the machine the

absence of which is conspicuous, in view of the fact that, it has been a visitor to the Royal for some years now, is the

Overtime—at any rate, we do EA find it entered, nor can we find it, on the show

ground. There are other absentees, in cluding the Renault and the Romeo; that were present last year, but these are not so much missed as they have not, been regular visitors. There are practically no newcomers and there is no agrimotor at Cambridge, that is actually new, except an entry by Saundersons.

where, with other Fowler specialities, is found the Fowler motor cable engine,

with three road speeds and three speeds on the drum fitted with steel winding drum and 501 yds. of steel wire rope for cable ploughing and cultivating.

Martin's Cultivator Co., Ltd., Stamford, on Stand •No. 194, show the Martin general-purpose 4-wheel agri motor. This is of the same type as the model exhibited last year at Derby ; practically no alterations have been made. It is 'fitted with the winding drum arrangement similar to the Saundersun Model On this stand, too, there are various cultivators for power work, some fitted with the self-lift and adjustable hitch and others with manual lift, and with either front wheels or adjustable hitch. The Martin grubber and the combined cultivator and ridger are interesting. Stand No. 198. is occupied by Frank Alvin Standen, St, Ives. The Austin tractor will be seen here, together with several power cultivators, and haymaking and harvesting machinery by 020 well-known makers, met aa Corbett and Son, Rausomes, Sims and Jefferiea, Ruston and Hornsby, .Harrison McGregor, Ltd., and others. What may be the most surprising entry in the implement section of the Show is shown here: It, is a set of cable engines, manufactured by A. Borsig, Tegel, Berlin, and selling at 1,100 per pair, subject to confirmation —about a quarter of the price for most British-made sets. The implements for these engines include an anti-balanced 4-furrow plough and a self-lift cultivator at quite reasonable prices. On Stand No, 2011the Saunderson Tractor and Implement Co., Bedford, show the Saunderson Model "G " 2.3-25 h.p. agrimotor. This appliance has three speeds forward' and one reverse, and is fitted with winding drum and cable, patent 3-point suspension and spring drawbar for agricultural and transport purposes. Another of the same model drives a threshing machine, manufactured by Marshall, Sons and

Co., Ltd., Gainsboro' On the same stand there is a spring-mounted trailing wagon of 5 to 6-tons capacity; with steel wheels and screw brake., the drawbar fore-carriage swivelling completely round. The light tractor is quite a new model and is sure to find a good market.

Rustem and Hornsby, Ltd., Grantham, on Stand No. 210, show two models of the British Wallis tractor, the standard type for agricultural purposes, and the traction engine type, with strokes for road haulage. On Stand No. 216, Freak. and James Howard, Ltd., Bedford, display the Peterbro' agrimotor, 30-35 h.p., for use with 3-furrow or 4-furrow plough for driving stationary machinery and for road haulage. Blackstone and Co., Ltd., Stamford, exhibit the Blackstone caterpillar agrimotor on Stand No. 217.

On Stand No. 220 J. and H. McLaren, Leeds, exhibit their fine motor windlasses together ' with' necessary accessories.

. Stand No. 226 is occupied by Wallace (Glasgow), Ltd., Glasgow. There are shown two Glasgow tractors of 27 b.h.p. rating, the 4-cylinder engines being suitable for petrol or paraffin. The Glasgow has three wheels, all of which are driven direct through transmission from the engine; there is no differential gear.

Henry Garner, Ltd., Moseley Works, Birmingham, occupy Stand No. 256. There are two models of the Garner agrimotor, the one driving a threshing box. The Garner is of the four-wheel type, having four-cylinder internal-combustion motor, three-point suspended, and equipped with a paraffin vaporizer. and a magneto. It is spring-mounted in front, has a pulley for threshing and all belt work, and is equipped with patent quick detachable land grips designed for ploughing, cultivating, harrowing and harvesting. The Garner is also ;hewn by Greens, of Stan-stead, Essex' on Stand No. 231.

On Stand No. 258 King and Harper, Cambridge, exhibit the Fordson tractor, together with road wheels for fitting to the Fordson and various designs of Ford vans.

A display of Caae'products, manufaca Lured by the J.I. Case Threshing Machine Co., Chicago, is made on Stand No. 265. The agrimotors shown include two models of Case'10-18 h.p., a model Case s5-27 h.p. and a. model Case 22-40 h.p: There are also accessories, including baling press and silo filler, disc harrow, fuet tank,•truck and tender and ,the'. Gamble binder hitch, a very useful appliance 'manufactured by Meadows Manufacturing Co., Illinois, U. S.A.

On Stind No. 266 will be seen the Austin products, principallythe Austin agrimotor and the Austin electric lighting set. The agrimotor will draw a three-furrow plough at a speed of 2& miles per hour, making three furrows 10 ins, in width and from 6 ins. to 10 ins, in depth, according to the nature of the soil. In addition to ploughing, the power is available for cultivating, mowing, reaping and hauling. Used with a wide belt, it will supply power for any kind of stationary work, including threshing. The Austin agrimotor is also shown by Barclay, Ross and Hutchinson, of Aberdeen (Stand No. 233). Stand No. 267 is occupied by H. G. Burford and Co., showing the Cletrac chain track agrimotor, Model W, and the Cletrac Junior, Model F. This little tractor will prove very interesting to all visitors. It is also shown on Stand No. 268 by Drake and Fletcher, Maidstone.

The Parrett agrimotor, manufactured by the Parrett Tractor Co., will be found on Stand No. 275, displayed by Robert Maynard, Ca,mbridge. It has three speeds forward and one reverse. The drive is entirely enclosed; there are four speeds, the lubrication is convenient, and with high wheel§ and a short turn the Parrett offers distinct advantages.

The Crawley Agrimotor Co., of Saffron Walden, showltwo models of the 30 h.p. Crawley agrimotor on Stand No. 292, the one turning three furrows and the other being a one-way machine. The Crawley can be converted to a four-wheeler for haulage purposes.

On Stand No. 293 the British Hart Parr Co. have arranged the 30 hp. Hart Parr to raise itself from the ground by Means of ropes working on the rear wheels. This demonstrates the power of the engine in the &awbar pull. The Hart Parr 20 h.p. is also shown. The Hoover potato digger on the same stand will be interesting, as it is capable of being used with the agrimotor.

W. Weeks and Sons, Ltd., on Stand No. 302, show the New Britain light plantation tractor and ridging cultivator maniffactured by the New Britain Tractor Co., Conn., U.S.A., with a plough suitable for work therewith. The Weeks-Dungey New Simplex 30 h.p. agrimotor is also shown on this stand. It is specially narrow in construction for use in plantations.

motor, a very useful and well-built machine, in their exhibit on stand No.

332. _ A trailer suitable for 5-6-ton loads and of very sturdy construction is shown by the Saunderson Tractor and Implement Co. on Stand No. 201.

Two trailers are shown on E. A. Dyson and Co., Ltd. 's stand (No. 295). These comprise a 3-ton patented allsteel type with built-up steel disc wheels mounted on floating phosphor-bronze bushes and providecl,with solid rubber tyres. The front portion of the platform body is mounted on a turntable, and braking is on the front wheels only. The other trailer is.a 4-5-ton side and end-tipping type fitted with Bromilow and Edwards' hydraulic tipping gear. In other respects this trailer resembles the one already described, and also runs on sialid rubber tyres.

Stand No. 493 is. occupied by the Eagle Engineering Co., Ltd., whose trailers, tipping gears and tipping bodies are so well known.

The exhibits staged include an endtipping body with hand-operated singlescrew tipping gear mounted on a Ford ton truck. The body is particularly suitable for farmers' use, as it is provided with detachable slatted extensions to the sides for carrying farm produce.

A stoutly constructed and very wellsprung trailer with cast-steel wheels fitted with solid rubber tyres is shown on the Foden stand (No. 288). The front axle carries the steering turntable, and the braking is by contracting bands on the rear wheel drums. This trailer can be used either for steam or Detrol vehicles.