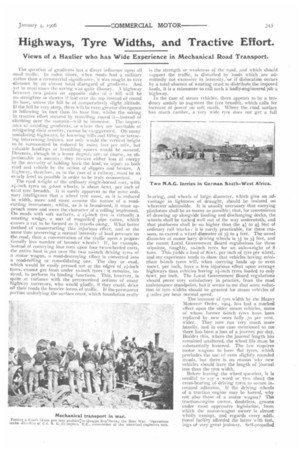 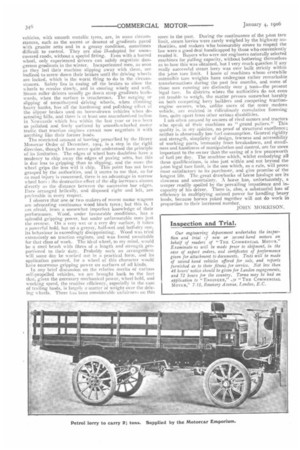 Views oi a Haulier who has Wide Experience in Mechanical Road Transport.

The question of gradients has a direct influence upon all troad traffic. In caden times, when roads had a military rather than a commercial significance, it was sought to save -distance by an almost total disregard of gradients. And .vet in most cases the saving was quite illusory. A highway between two points on opposite sides of a hill will be no straighter or shorter if laid over the top instead of round its base, unless the hill be of comparatively slight altitude. If the hill be very steep, there will be even greater divergence in following its face than its base line, whilst the saying in tractive effort secured by travelling round it—instead of • climbing over the sununit—will be immense. The importam-e of avoiding gradients, Or where they are inevitable of mitigating their severity, cannot be exaggerated. On many undulating highways, by lowering hills and fillingor terracing intervening hollows, not only would the vertical height to be surmounted be reduced by many feet per mile, but valuable landings or breathing spaces would be secured. Descents, though in a lesser degree, are, of course, as objectionable as ascents : they invo:ve either loss of energy by the necessity of holding back the load, or injury to both road and vehicle by the action of slippers and brakes. A highway, therefore, as in the ease of a railway, must be as nc:trly level as possible in order to be truly economical. The road weight of the ordinary single-horsed cart, with 2i-inch tyres on 5-1oot wheels, is about 6cwt. per inch of total tyre breadth. It is surely apparent to the most ordinary intelligence that a wheel tyre must, as it is reduced in width, more and more assume the nature of a road-cutting instrument, whilst, as it is broadened, it must approach more and more the character of a rolling implement. On roads with soft surfaces, a 2-inch tyre is virtually a rotating wedge, a sort of magnified pipe cutter, which .causes a rut to be formed as it travels along. What better method of counteracting this injurious, effect, and at the same time preserving a normal intensity of load pressure on the road, than a concentration of the traffic upon a proportionally less number of broader wheels? I f, for example, 'instead of conveying four tons upon four two-wheeled carts, the entire load is put over the two in-inch driving tyres of 1-i motor wagon, a road-destroying effect is converted into -a road-rolling or consolidating one. The clay or mud, which would be easily pressed out at the edges of 21-inch tyres, cannot get from under in-inch tyres : it remains, instead, to perform its binding functions. This, however, is quite at variance with the preconceived notions of many highway surveyors, who would gladly, if they could, drive off their roads the heavier forms of traffic. If the permanent portion underlying the surface crust, which foundation really

is the strength or weakness of the road, and which should support the traffic, is disturbed by loads which are admittedly not excessive in intensity, or if dislocation occurs by a total absence of wearing crust to distribute the imposed loads, it is a misnomer to call such a badly-engineered job a highway. In the case of steam vehicles, there appears to be a tendency unduly to augment the tyre breadth, which calls for increase of power on soft roads. Where the road surface has much camber, a very wide tyre does not get a full

bearing, and wheels of large diameter, which give an advantage in lightness of draught, should be insistedon wherever admissible. It is usually necessary that carrying platforms shall be as roomy as possible; that, for convenience of drawing up alongside loading and discharging docks, the wheels shall be tucked well out of the way underneath, and that platforms shall be no higher than the 4.1 to 44 feet of ordinary rail trucks: it is rarely practicable, for these reasons, to exceed a wheel diameter of 34 to 4 feet. The usual diameter of motor lorry driving wheels is 34 to 34 feet, and the recent Local Government Board regulations for these stipulate, roughly, io.inch tyres for an axle-weight of 8 tons. This yields a load of 8cwt. per inch of tyre per wheel, and my experience tends to show that vehicles having minimum 6-inch tyres will, when carrying loads up to even mem. per inch, have a less injurious effect upon average highways than vehicles having 24-inch tyres loaded to only 6cwt, per inch. The Local Government Board regulations should prove very satisfactory in practice, from the road maintenance standpoint, but it seems to me that some reduction in tyre widths should be granted for steam vehicles of 5 miles per hour normal speed.

The increase of tyre width by the Heavy Motorcar Order, 1904, has had a marked effect upon the older steam vehicles, some of whose former 6.inch tyres have been replaced by new ones fully Z.0 per cent. wider. They now run very much more heavily, and in one case mentioned to me there has been a loss of a journey per day. Besides this, where the journal length has remained unaltered, the wheel life must be substantially lessened. The law requires motor wagons to have flat tyres, which precludes the use of even slightly rounded treads, but there is no reason why new vehicles should have the length of journal less than the tyre width.

Before leaving the wheel question, it is needful to say a word or two about the cross-bearing of driving tyres to secure increased adhesion. If the driving wheels of a traction engine may be barred, why not also those of a motor wagon? The traction-engine owner, doubtless, groans under most oppressive legislation, from which the motor-wagon owner is almost wholly exempt, and regards every additional facility afforded the latter with feelings of very great jealousy. Self-propelled

vehicles, with smooth metallic tyres, are, in some circumstances, such as the ascent or descent of gradients paved with granite setts and in a greasy condition, sometimes difficult to control. They are also ill-adapted for snowcovered roads, without a special fitting. Even with a barred wheel, only experienced drivers can safely negotiate dangerous gradients in the winter. Inexperienced men, as soon as they feel their machine slipping away with them, are inclined to screw down their brakes until the driving wheels are locked, which is the worst thing to do in the circumstances. Safety lies in easing off the brakes to allow the wheels to revolve slowly, and in steering wisely and well. Steam roller drivers usually go down steep gradients backwards, when the surface is treacherous. The surging or slipping of smooth-tyred driving wheels, when climbing heavy banks, has all the hardening and polishing effect of the supper brakes used on horse-drawn vehicles when descending hills, and there is at least one macadamised incline in Newcastle which has within the last year cx two been so polished and finely surfaced by smooth-wheeled motor traffic that traction engines cannot now negotiate it with anything like their former leads.

The restricted amount of barring prescribed by the Heavy Motorcar Order of December, 1904, is a step in the right direction, though I have never quite understood the principle of its limitation. The edges of wheel bars doubtless have a tendency to chip away the edges of paving setts, hut. this is due less to gripping than to slipping, and the more the wheel grips the less will it chip. This point has not been grasped by the authorities, and it seems to me that, so far as road injury is concerned, there is an advantage in narrow wheel bars : the destructive effect of the slip increases almost directly as the distance between the successive bar edges. Dars arranged helically, and disposed right and left, are preferable in every respect.

I observe that one or two makers of recent motor wagons are advocating continuous Wood block tyres; but this is, I am afraid, from a somewhat imperfect knowledge of their performance. Wood, under favourable conditions, has a splendid gripping power, but under unfavourable ones just the reverse. On a very wet or a very dry surface, it takes a powerful hold, but on a greasy, half-wet and half-dry one, its behaviour is exceedingly disappointing. Wood was tried extensively on traction engines, and was found unsuitable for that class of work_ The ideal wheel, to my mind, would be a steel brush with fibres of a length and strength proportioned to their duty. Probably such an arrangenient will some day be worked out in a practical form, and its application patented, for a wheel of this character would have enormous gripping power on surfaces of all kinds. In any brief discussion on the relative merits of various self-propelled vehicles, we are brought back to the fact that, given the necessary mechanical power, wheel hold, and working speed, the tractive efficiency, especially in the case of trailing loads, is largely a matter of weight over the driving wheels. There has been considerable unfairne, on this

score in the past. During the continuance of the 3-ton tare limit, steam lorries were rarely weighed by the highway authorities, and makers who honourably strove to respect the law were a good deal handicapped by those who conveniently evaded it. Buyers who were not engineers naturally selected machines for pulling capacity, without bothering themselves as to how this was obtained, but I very much question if any really successful steam lorry was ever built strictly within the 3-ton tare limit. I know of machines whose erstwhile ostensible tare weights have undergone rather remarkable transformations during the past few months, and some of those now running are distinctly over 5 tons—the present legal tare. In districts where the authorities do not even yet trouble to weigh, the matter presses somewhat harshly on both competing lorry builders and competing tractionengine owners, who, unlike users of the more modern vehicle, are mulcted in ridiculously cumulative licensing fees, quite apart from other serious disabilities. I am often amused by owners of rival motors and tractors who speak of their machines as " grand pullers." This quality is, in my opinion, no proof of structural excellence; neither is abnormally low fuel consumption. General rigidity and strength, simplicity of design, fewness and accessibility of working parts, immunity from breaksdown, and steadiness and handiness of manipulation and Control, are far more important to the owner than the saving of a few penceworth of fuel per day. The machine which, whilst embodying all these qualifications, is also just within and not beyond the 5-ton legal tare limit, is the one which, as a rule, will prove most satisfactory to its purchaser, and give promise of the longest life. The great drawbacks of horse haulage are its slowness and uncertainty. A horse has, unfortunately, a temper readily spoiled by the prevailing impatience and incapacity of his driver. There is, also, a substantial loss of efficiency in multiplying animal power for handling heavy loads, because horses yoked together will not do work in proportion to their increased number.