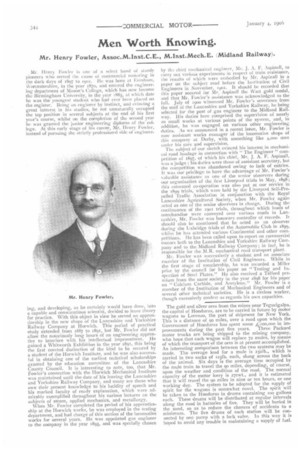 Mr. Henry Fowler is one of a select band of sturdy pioneers who served the cause of commercial motoring in the dark days of 1897 to 1901. He was born at Evesham, -%Vorcestershire, in the year 1870, and entered the engineering department of Mason's College, which has now become the Birmingham University, in the year 1885, at which date he was the youngest student who had ever been placed on the register. Being an engineer by instinct, and evincing a great interest in his studies, he not unnaturally occupied the top position in several subjects at the end of his first year's course, whilst on the completion of the second year he was granted the junior engineering diploma of the college. At this early stage of his career, Mr. Henry Fowler, instead of pursuing the strictly professional side of engineer.

big, and developing, as he certainly would have done, into a capable and conscientious scientist, decided to leave theory for practice. With this object in view he served an apprenticeship in the new shops of the Lancashire and Yorkshire Railway Company at Horwich. This period of practical study extended from 1887 to 1891, but Mr. Fowler did not allow the notoriously long hours of an engineering apprentice to interfere with his intellectual improvement. He gained a Whitworth Exhibition in the year 1891, this being the first coveted distinction of the kind to be secured by a student of the Horwich Institute, and he was also successful in obtaining one of the earliest technical scholarships granted by the education committee of the Lancashire County Council. It is interesting to note, too, that Mr. Fowler's connection with the Horwich Mechanical Institute was maintained until the date of his leaving the Lancashire and Yorkshire Railway Company, and many are those who owe their present knowledge to his lucidity of speech and his marked faculty of ready explanation, which were admirably exemplified throughout his various lectures on the subjects of steam, applied mechanics, and metallurgy.

When Mr. Fowler completed the period of his apprenticeship at the Horwich works, he was employed in the testing department, and had charge of this section of the locomotive works for several years. He was appointed gas engineer to the company in the year 1895, and was specially chosen

by the chief mechanical engineer, .M; . J. F. Aspinall, to

carry out various experiments in resia:ct of train resistance, the results of which were embodied by Mr. Aspinall in a paper on the subject read before the Institution of Civil Engineers in November, 1901. It should be recorded that this paper secured for Mr. Aspinall the Watt gold medal, and that Mr. Fowler's assistance was acknowledged to the full, July of 1900 witnessed Mr. Fowler's severance from the stair of the Lancashire and Yorkshire Railway, he being selected for the post of gas engineer to the Midland Railway. His duties here comprised the supervision of nearly zo small works at various points of the system, and, in addition, he was engaged on various other engineering duties. As we announced in a recent issue, Mr. Fowler is now assistant works manager of the locomotive shops of this company at Derby, with something like 4,000 men under his care and supervision.

The subject of our sketch evinced his interest in mechanical road haulage in connection with "The Engineer" competition of 1897, of which his chief, Mr. J. A. F. Aspinall, was a judge : his duties were those of assistant secretary, but the competition was abandoned owing to lack of entries. It was our privilege to have the advantage of Mr. Fowler's saluable assistance as one of the senior observers during our organisation of the first Liverpool trials in May, 1898; this esteemed co-operation was also put at our service in the 1899 trials, which were held by the Liverpool Self-Propelled Traffic Association in conjunction with the Royal Lancashire Agricultural Society, when Mr. Fowler again acted as one of the senior observers in charge. During the coniinuance of the 1901 trials, throughout which loads of merchandise were conveyed over various roads in Lancashire, Mr. Fowler was honorary controller of records. It should also be mentioned that he acted as an observer during the Uxbridge trials of the Automobile Club in 1899, whilst he has attended various Continental and other competitions. He has been called upon to report on commercial motors both to the Lancashire and Yorkshire Railway Company and to the Midland Railway Company; in fact, he is responsible for the M.R. mechanical road transport plant.

Mr. Fowler was successively a student and an associate member of the Institution of Civil Engineers. While in the first stage of membership, he was awarded a Miller prize by the council for his paper on " Testing and Inspection of Steel Plates." He also received a Telford premium from the same society in the year 1898 for his paper on "Calcium Carbide, and Acetylene." Mr. Fowler is a member of the Institution of Mechanical Engineers and of several other technical societies. He is a tireless worker, though excessively modest as regards his own capacities.

The gold and silver ores from the mines near Tegucigalpa, the capital of Honduras, are to be carried in future by motor wagons to Lorenzo, the port of shipment for New York. This is a distance of 90 miles, over a road upon which the Government of Honduras has spent some £200,000 in im

provements during the past five years. Three Packard motor trucks are being shipped to the mining company, who hope that each wagon will replace 72 mules, by means of which the transport of the ores is at present accomplished. An interesting comparison between the two systems may be made. The average load for a mule is zsolb., which is carried in two sacks of 125113. each, slung across the back of the animal. Six days is the average time occupied by the mule train to travel the 90 miles, depending, of course, upon the weather and condition of the road. The normal capacity of the motor lorry is newt., and it is estimated that it will travel the 90 miles in nine or ten hours, or one working day. The system to be adopted for the supply of spirit for the wagons is somewhat novel. The spirit will be taken to the Honduras in drums containing too gallons each. These drums will be distributed at regular intervals along the road in batteries of five. They will be buried in the sand, so as to reduce the chances of accidents to a minimum. The five drums of each station will be connected by one pump with a lock valve. In this way it is hoped to avoid any trouble in maintaining a supply of fuel.