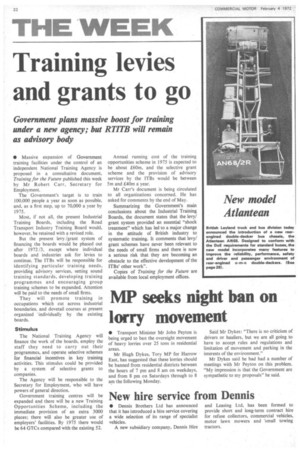 • Transport Minister Mr John Peyton is being urged to ban the overnight movement of heavy lorries over 25 tons in residential areas.

Mr Hugh Dykes, Tory MP for Harrow East, has suggested that these lorries should be banned from residential districts between the hours of 7 pm and 8 am on weekdays, and from 8 pm on Saturdays through to 8 am the following Monday. Said Mr Dykes: "There is no criticism of drivers or hauliers, but we are all going to have to accept rules and regulations and limitation of movement and parking in the interests of the environment."

Mr Dykes said he had had a number of meetings with Mr Peyton on this problem. "My impression is that the Government are sympathetic to my proposals" he said.