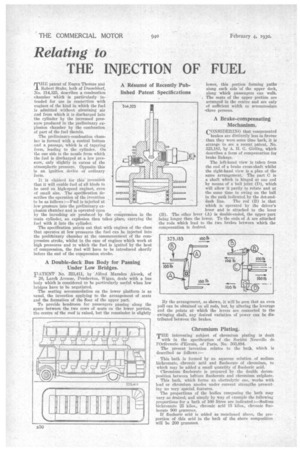 Page 76, 4th February 1930 — Relating to
Close
Noticed an error?
If you've noticed an error in this article please click here to report it so we can fix it.
Keywords : Internal Combustion Engine, Combustion Chamber, Stroke, Piston Engines, Engines, Stationary Engines

THE INJECTION OF FUEL A Resume of Recently Published Patent Specifications

MHE patent of Eugen Thomas and Robert Stuhr, both of Dusseldorf, No. 314,325, describes a combustion chamber which is particularly intended for use in connection with engines of the kind in which the fuel is admitted without atomizing air and from which it is discharged into the cylinder by the increased pressure produced in the preliminary explosion chamber by the combustion of part of the fuel therein.

The preliminary-combustion chamber is formed with a conical bottom and a passage, which is of tapering form, leading to the cylinder. On the one side is the nozzle from which the fuel is discharged at a low pressure, only slightly in excess of the atmospheric pressure. Opposite this is an ignition . device of ordinary form.

It is dunned for this invention that it will enable fuel of all kinds to be used on high-speed engine, even of small size. The specification describes the operation of the invention to be as follows :—Fuel is injected at low pressure into the preliminary explosion chamber and is operated upon by the inrushing air produced by the compression in the main cylinder, an explosion then takes place, carrying the fuel with it into the cylinder.

A Double-deck Bus Body for Passing Under Low Bridges.

pATENT No. 323,411, by Alfred Marsden Alcock, of 20, Larch Avenue, Pemberton, Wigan,. deals with a bus body which is considered to be particularly useful when low bridges have to be negotiated.

The seating accommodation on the lower platform is as usual, the invention applying to the arrangement of seats and the formation of the floor of the upper patt.

To provide headroom for passengers passing along the space between the two rows of seats on the lower portion, the centre of the roof is raised, but the remainder is slightly

lower, this portion forming paths along each side 'of the upper deck, along which passengers can walk. The seats of the upper portion are arranged in the centre and are only of sufficient width to accommodate -three persons.

brakes are distinctly less in favour than they were some time back, it is strange to see a recent patent, No. 323,183, by A. II. 0. Girling, which describes a form of compensation for brake linkage.

The left-hand view is taken from the end of a brake cross-shaft whilst the right-hand view is a plan of the same arrangement. The part C is a shaft which is binged at one end by means of a ball joint (11), which will allow it partly to rotate and at the Caine time to swing on the ball in the path indicated by the dot-and dash line. The rod (B) is that which is operated by the driver's • lever and is attached to the lever (E). The other lever (A) is double-ended, the upper part being longer than the lower. To the Oils of A are attached

• the rods which lead to the two brakes between which the compensation is desired.

Ey the arrangement, as shown, it will be seen that an even pull can be obtained on all rods, but, by altering the leverage and the points at which the levers are connected to the swinging shaft, any desired variation of power can be distributed between the brakes.

THE interesting subject of chromium plating is dealt with in the specification of the Societe Nouvelle de POrfevrerie d'Ercuis, of Paris, No. 303,884.

The present invention relates to the bat), which is described as follows:— This bath is formed by an aqueous solution of sodium bichromate, chromic acid and fluoborate of chromium, to which may be added a small quantity of fluoboric acid.

This bath, which forms an electrolytic one, works with lead or chromium anodes under current strengths presenting no very special features.

The proportions of the bodies composing the bath may vary as desired, and simply by way of example the following Proportions for a bath of 100 litres are indicated :—Sodium bichrornate 25 kilos., chromic acid 15 kilos., chromic flueborate 800 grammes.

If fluoborie acid is added as mentioned above, the proportion of this acid in the bath of the above composition will be 200 grammes.