PLYING FOR HIRE WITH MOTOR COACHES. 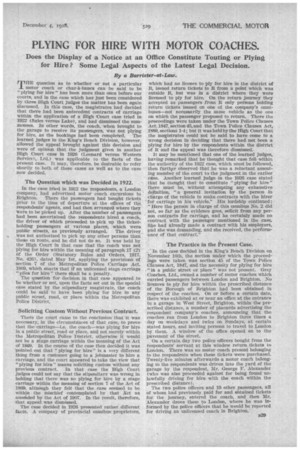 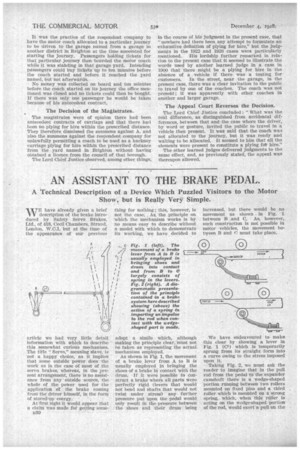 Does the Display of a Notice at an Office Constitute Touting or Plying for Hire ? Some Legal Aspects of the Latest Legal Decision.

T"question as to whether or not a particular motor mach or char-h-bancs can be said to be " plying for hire" Ms been more than once before our courts, and in the case which has just been considered by three High Court judges the matter has been again discussed. In th;s case, the magistrates had decided that there had been antecedent contracts of carriage Within the application of a High Court case tried in 1922 (Sales versus Lake), and had dismissed the summonses. In other words, the coach, when brought to the garage to receive its passengers, was not plying for hire, as the bookings had been completed. The learned judges in the King's Bench Division, however, allowed the appeal brought against this decision and were of opinion that the judgment given in another High Court case in 1926 (Leonard versus Western Service,, Ltd.) was applicable to the facts of the present case. It may, therefore, be desirable to refer shortly to both of these cases as well as to the case now decided.

The Question which was Decided in 1922. • in the ease tried in 1922 the respondents, a London company, had advertised motor coach excursions to Brighton. There the passengers had bought tickets Prior to the time of departure at the offices of the respobdents agents, and had then arranged where they were to be picked up. After the number of passengers had been ascertained the respondents hired a coach, the driver of which proceeded to pick up the ticketholding passengers at various places, which werepublic streets, as previously arranged. The driver was not authorized to pick up any other persons than these en route, and he did not do so. R was held by. the High Court in that case that the coach was not plying for hire within the meaning of paragraph 17 (2) Of the Order (Statutory Rules and Orders, 1917, No. 426), dated May 1st, applying the provisions of section 7 of the Metropolitan Police Carriage Act, 1869, which enacts that if an unlicensed stage carriage "plies for hire" there shall be a penalty.

The question for decision in that case appeared to be whether or not, upon the facts set out in the special ease stated by the stipendiary magistrate, the coach could be said to have been plying for hire in any public street, road, or place within the Metropolitan Police District.

There the court came to the conclusion that 'it was necessary, in the circumstances of that case, to prove that the carriage—i.e. the coach—was plying for hire in a public street, road or place, and not merely within the Metropolitan Police District, otherwise it would not be a stage carriage within the meaning of the Act of 1869. In the course of the case then decided it was 'pointed out that "plying for hire" is a very different thing from a customer going to g jobmaster to hire a carriage, and the court appeared to take the view that "plying for hire" means soliciting custom without any previous contract. In that case the High Court judges could not say that the stipendiary was wrong in holding that there was no plying for hire by a stage carriage within the meaning of section 7 of the Act of 1869, although they felt that the case seemed to be within the mischief contemplated by that Act as amended by the Act of 1907. In the result, therefore, that appeal was dismissed.

The case decided in 1926 presented rather different facts. A company of provincial omnibus proprietors,

which had no licence to ply for hire in the district of It, issued return tickets to It from a point which was outside It, but was in a district where they were licensed to ply for hire. On the return journey they accepted as passengers _from It only persons holding return tickets issued on one of the company's minibuses—not necessarily the same vehicle as the one on which the passenger proposed to return. There the proceedings were taken under the Town Police Clauses Act,1847, section 45, and the Town Police Clauses Act, 1889, sections 1-4; but it was held by the High Court that the magistrates could not be said to have come to a wrong decision in deciding that there had not been a plying for hire by the respondents within the district of It and the appeal was therefore dismissed.

It may be mentioned that one of the learned judges, having remarked that he thought that case fell within the authority of the 1922 case, which must be followed, then further observed that .he was a reluctant assenting member of the court to the judgment in the earlier ' case. Another learned judge in the 1926. case stated that he thought thatto constitute 'plying for hire" there must be, without attempting any exhaustive defmition, "a' general invitation by the person in charge of the vehicle to make contracts with the hirer 'for carriage in his vehicle." His lordship continued: "Here the person in. charge of this omnibus No. 2 did not, so far as the evidence goes, solicit from any person contracts for carriage, and he certainly made no contract with the passenger mentioned in the ease. She had already made a contract with his employers, end she was demanding, and she received, the performance of that contract."

• The Practice in the i'resent Case.

the case-decided in the King's Bench Division on November 16th, the section under which the proceed

ings were taken was section 45 of the Tewn Police Clauses Act, 1847, and the necessity for plying for hire • "in a public street or place" was not present. Grey Coaches, Ltd., owned a number of motor coaches which carried passengers between London and Brighton. No licences to ply for hire within the prescribed distance of the Borough of Brighton had been obtained in respect of the coaches. On or before a certain date, there was exhibited at or near an office at the entrance to a garage in West Street, Brighton; within the preeteribed distance, a number of placards advertising the respondent company's coaches, announcing that the coaches ran from London to Brighton three times a day on weekdays and twice on Sundays, at certain stated hours, and inviting persons to travel to London by them. A window of the office opened on to the pavement of the street. On a certain day two police officers bought from the respondents' servant at this window return tickets to London. There was no motor coach present belonging to the respondents when these tickets were purchased. Twenty-five minutes afterwards a motor coach belonging to the respondents was driven into the yard of the garage by the respondent, Mr. George F. Alexander (who was also proceeded against for being found unlawfully driving for hire with the coach within the prescribed distance).

The two police officers and 19 other passengers, all of whom had previously paid for and obtained tickets for the journey, entered the coach, and then Mr. 'Alexander drove them to London, where he was informed by the police officers that he would be reported for driving an unlicensed coach in Brighton. It was the practice of the respondent company to have the motor coach allecated to a particular journey to be driven to the garage named from a garage in another district in Brighton at the time appointed for starting the journey. Passengers holding tickets for that particular journey then boarded the motor coach' while it was stahding in that garage yard. Intending passengerscould buy tickets up to ten minutes before the coach started and before it reached the yard named, but not afterwards.

No money was collected on board and ten minutes before the coach started on its journey the office mentioned was closed and no tickets could then be bought. If there was only one passenger he would be taken because of his antecedent contract.

The Decision of the Magistrates.

The magistrates were of opinion there had been antecedent contracts of carriage and that there had been no plying for hire within the prescribed distance. They therefore dismissed the summons against A. and also the summons against the respondent company for unlawfully permitting a coach to be used as a hackney carriage plying for hire within the prescribed distance from the yard named in Brighton without having obtained a licence from the council of that borough.

The Lord Chief Justice observed, among other things, in the course of his judgment in the present case, that "nowhere had there been any attempt to formulate an exhaustive definition of plying for hire," but the judgments in the 1922 and 1926 cases were particularly mentioned. His lordship further remarked in relation to the present case that it seemed to illustrate the words used by another learned judge in a case in 1906 that there might be a plying for hire in the absence of a vehicle if there was a touting for customers. In the street, near the garage, in the present case, there was a clear invitation to the public to travel by one of the coaches. The coach was not Present; it was apparently with other coaches in another and larger garage.

The Appeal Court Reverses the Decision.

The Lord Chief Jtstice concluded: "What was the real difference, as distinguished from accidental dif,ferences, between that and the case where the driver, by word or gesture, invited the public to travel in a vehicle then present. It was said that the coach was not allocated to the journey, but it was ready and waiting to be allocated. It seemed to him that all the elements were present to constitute a plying fct hire." The other learned judges delivered judgments to the same effect, and, as previously stated, the appeal was thereupon allowed.