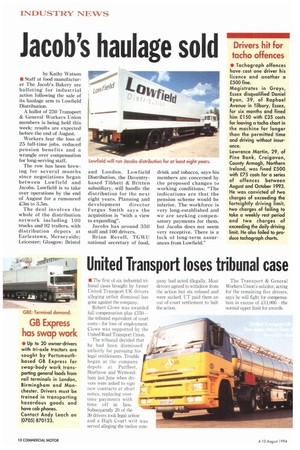 Robert Clowe was awarded full compensation plus £150— the tribunal equivalent of court costs—for loss of employment. Clowe was supported by the United Road Transport Union.

The tribunal decided that

he had been dismissed / — unfairly for pursuing his f_jt7P--1-:--legal entitlements. Troublt. began at the company depots at Purfleet, Heathrow and Wymondham last June when drivers were asked to sign new contracts at short notice, replacing overtime payments with time off in lieu. Subsequently 20 of the 30 drivers took legal action and a High Court writ was served alleging the tanker corn pany had acted illegally. Most drivers agreed to withdraw from the action but six refused and were sacked. UT paid them an out-of-court settlement to halt the action.

The Transport & General Workers Union's solicitor, acting for the remaining five drivers, says he will fight for compensation in excess of £11,000—the normal upper limit for awards.