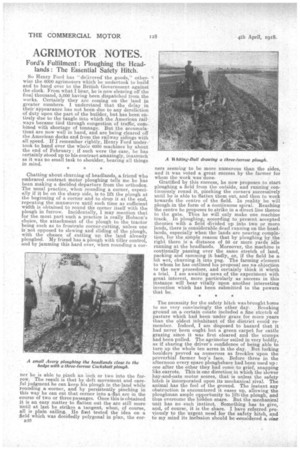 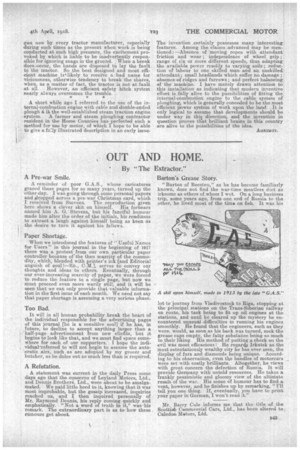 Page 18, 4th April 1918 — AGRIMOTOR NOTES.
Close
Noticed an error?
If you've noticed an error in this article please click here to report it so we can fix it.

So Henry Ford has "delivered' the goods,' otherwise the 6000 agrimotors which he undertook to build and to hand over to the British Government against the clock. From what I hear, he is now clearing off the final thousand, 5,000 having been dispatched trom the works. Certainly they are coming on the land in greater numbers. I understand that the delay in their appearance has not beendue to any dereliction (if duty upon the part of the builder, but has been entirely due to the tangle into which the American railways became tied through congestion of traffic, combined with shortage of tonnage. But the accumulation§ are now well in hank and are being cleared off the American docks and from the railway sidings with all speed. If I remember rightly, Henry Ford under-' took to hand over the whole 6000 machines by abOut the end of February : if such were the case, he has certainly Stood up to his contract amazingly, inasmuch as it was no small task to shoulder, bearing all things in mind.

Chatting about churning of headlands, a friend who embraced contract motor ploughing tells me he has been making a decided departure from the orthodox. The usual practice, when rounding a corner, especially if it be on the sharp side, is to lift the plough at the beginning of a corner and to drop it at the end, repeating the manceuvre until such time as sufficient width is obtained to round the corner itself with the plough in furrow. Incidentally, I may mention that for the most part such a practice is really Hobson's choice, the attachment. of the plough to the tractor being such as to frustrate corner-cutting, unless one is not opposed to slewing and sliding of the plough, with the chance of cutting up the land already ploughed. My friend has a plough with tiller control, and by jamming this hard over, when rounding a cor

ncr he is able to pinch an inch or two into the furrow. The result is that by deft movement and careful judgment he can keep his plough in the land while rounding acorner and by persistently pinching in this way he can cut that corner into afiat arc in the course of two or three passages. Once this is obtained it is an easy matter to flatten out the arc still more until at last he strikes a tangent, when, of course, all is plain sailing. He fist tested the idea on a field which was decidedly polygonal in plan, the cor'EfO

tiers seeming to be more numerous than the sides, and it was voted a great success by the farmer for whom the work was done

Gratified by this success, he now 'proposes to start ploughing a field from the •outside, and running continuously round it, pinching the corners' successively until he is able to flatten them out, and then to work towards the centre .of the field. in reality he will plough in the form of a continuous spiral. Reaching the centre he proposes to strike in a direct line thence to the gate. Thus he will only make one machine track. In ploughing, according to present accepted theories with a field divided up into two or more lands, there is considerable (lead running on the headlands, especially when the lands are nearing completion, for the simple reason that by ploughing by the right there is a distance of 50 or more yards idle running at the headlands. Moreover, the machine is continually passing over the same stretch of land, packing and ramming it badly, or) if the field be a bit wet, churning it into pug. The farming element to whom he has outlined his proposal see n& objection to the new procedure, and certainly think it Worth a trial. I am awaiting news of the experiment with great interest, more particularly as success •in this instance will bear vitally upon another interesting invention which has been submitted to the powers

The necessity for the safety hitch was brought home to me very convincingly the other day. Breaking ground on a eertain estate included a fine stretch of pasture which had been -under grass for more years than the oldest inhabitant of the district could remember. Indeed, I am disposed to hazard that it had never been ought but a green carpet for cattle grazing since it was first cleared and the stumps had been pulled. The agrimotor sailed in very boldly, as if sharing the driver's confidence of being able to turn up the whole ten acres in the day. But lurking boulders proved as numerous as freckles upon the proverbial farmer boy's face. Before three in the afternoon every spare ploughshare had been used up : one after the other they had come to grief, snapping like carrots. This is one direction in which the 'slower hay-and-oats motor scores, that is unless the safety hitch is incorporated upon its mechanical rival. The animal has the feel of the ground. The instant any obstruction is encountered it eases up, allowing the ploughman ample opportunity to lift:rthe plough, 'and thus overcome the hidden snare. But the mechanical unit has no -such instinct. Something has to give, and, of course, it is the share. I have referred pre-. viously to the urgent need for the safety hitch, and to my mind its inclusion should be .considered a sine qua non by every tractor manu!actnrer, especially during such times as the present when work is being conducted at such high pressure, the excitement provoked by which is liable to be inadvertently responsible for ignoring snags in the ground. When a break does..occur, the hands are disposed to lay the fault tO the tractor. So the best designed and most efficient machine iv-likely to receive a bad name for viciousness, otherwise tendency to break the shares,

• when, as a matter of fact, the tractor is not at fault at all. However, an efficient safety hitch system nearly always overcomes the trouble.

• system. A farmer and steam ploughing contractor . resident in the Home Counties has perfected such a method for use by motor, of which hope to be able to give a fully illustrated descriptian in an early issue.

The invention certainly possesses many interesting features. Among the claims advanced may be mentinned : —Absence of moving ropes with attendant friction and wear ; independence of wheel grip ; range of six or more different speeds, thus adapting the available power readily to varying soils ; reduction of labour to one skilled man and an unskilled attendant ; small headlands which suffer no damage.; absence of ridges and furrows ; and perfect balancing of' the machine. I have merely drawn attention to this installationas indicating that modern inventive effort is fully alive to the possibilities of fitting the internal-combustion engineto the cable system of ploughing, which is generally conceded to he the most efficient power system of work upon the land. It is only logical to assume that developments should be under way in thiq. direction, and the invention in question proves that brilliant brains in this country are alive to the possibilities of the idea.