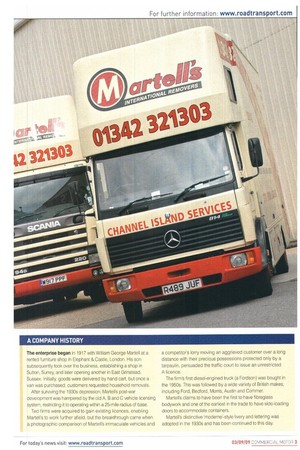 Page 39, 3rd September 2009 — A COMPANY HISTORY
Close
Noticed an error?
If you've noticed an error in this article please click here to report it so we can fix it.
Keywords : Ford Motor Company, Fordson Tractor, Tractors, East Grinstead

The enterprise began in 1917 with William George Martell at a rented furniture shop in Elephant & Castle, London. His son subsequently took over the business, establishing a shop in Sutton, Surrey, and later opening another in East Grinstead, Sussex. Initially, goods were delivered by hand cart, but once a van was purchased, customers requested household removals.

After surviving the 1930s depression, Martell's post-war development was hampered by the old A, B and C vehicle licensing System, restricting it to operating within a 25-mile radius of base.

Two firms were acquired to gain existing licences, enabling Martell's to work further afield, but the breakthrough came when a photographic comparison of Martell's immaculate vehicles and a competitor's lorry moving an aggrieved customer over a long distance with their precious possessions protected only by a tarpaulin, persuaded the traffic court to issue an unrestricted A licence.

The firm's first diesel-engined truck (a Fordson) was bought in the 1950s. This was followed by a wide variety of British makes, including Ford, Bedford. Morris, Austin and Commer.

Martell's claims to have been the first to have fibreglass bodywork and one of the earliest in the trade to have side-loading doors to accommodate containers.

Martell's distinctive 'moderne'-style livery and lettering was adopted in the 1930s and has been continued to this day.