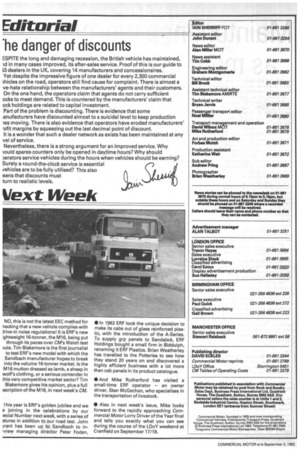 Page 4, 3rd September 1983 — %text Week
Close
Noticed an error?
If you've noticed an error in this article please click here to report it so we can fix it.
Keywords : Sandbach, Geography Of England, Cheshire, Geography Of The United Kingdom, Erf, Edwin Foden, Sons & Co., M16 Rifle

NO, this is not the latest EEC method for hecking that a new vehicle complies with irive-in noise regulations! It is ERF's new ;ghtweight 16-tonner, the M16, being put through its paces over CM's Welsh test )ute. Tim Blakemore is the first journalist to test ERF's new model with which the Sandbach manufacturer hopes to break into the volume 16-tanner market. Is the M16 mutton dressed as lamb, a sheep in wolf's clothing, or a serious contender in this very competitive market sector? Tim Blakemore gives his opinion, plus a full ?scription of the M16, in next week's CM.

This year is ERF's golden jubilee and we e joining in the celebrations by our )ecial Number next week, with a series of atures in addition to our road test. John Jrant has been up to Sandbach to in-view managing director Peter Foden. • In 1963 ERF took the unique decision to make its cabs out of glass reinforced plastic, with the introduction of the A-Series. To supply grp panels to Sandabck, ERF Holdings bought a small firm in Biddulph, renaming it ERF Plastics. Brian Weatherley has travelled to the Potteries to see how they stand 20 years on and discovered a highly efficient business with a lot more than cab panels in its product catalogue.

• And Mike Rutherford has visited a small-time ERF operator — an owner driver, Stan McGeehan, who specialises in the transportation of livestock.

• Also in next week's issue, Mike looks forward to the rapidly approaching Commercial Motor Lorry Driver of the Year final and tells you exactly what you can see during the course of the LDoY weekend at Cranfield on September 17/18.