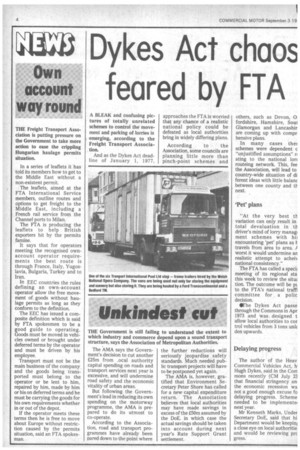 A BLEAK and confusing pictures of totally unrelated schemes to control the movement and parking of lorries is emerging, according to the Freight Transport Association.

And as the Dykes Act deadline of January 1, 1977, approaches the FTA is worried that any chance of a realistic national policy could be defeated as local authorities bring in widely differing plans.

According to the Association, some councils are planning little more than pinch-point schemes and others, such as Devon, 0: fordshire, Hamshire, Soul Glamorgan and Lancashir are coming up with compr hensive plans.

In many cases the schemes were dependent c "unjustified assumptions" rt ating to the national lorr routeing network. This, fee the Association, will lead to country-wide situation of di ferent ideas with little balanc between one county and th next.

"At the very best th variation can only result in total devaluation in th driver's mind of lorry manag4 ment schemes with hij encountering 'pet' plans as I. travels from area to area. A worst it would undermine an realistic attempt to acher‘ national consistency."

The FTA has called a speci meeting of its regional sta this week to review the sittu tion. The outcome will be pt. to the ETA's national traffi committee for a polic decision.

The author of the Heav, Commercial Vehicles Act, TV Hugh Dykes, said in the Com mons recently (CM July 23 that financial stringency an the economic recession wa not a good enough excuse fo delaying progress. Scheme needed to be implementei next year.

Mr Kenneth Marks, Under Secretary DoE, said that hi Department would be keepim a close eye on local authoritie: and would be reviewing prc gress.