Here's to you, kid 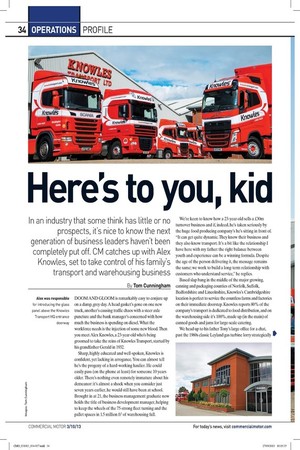 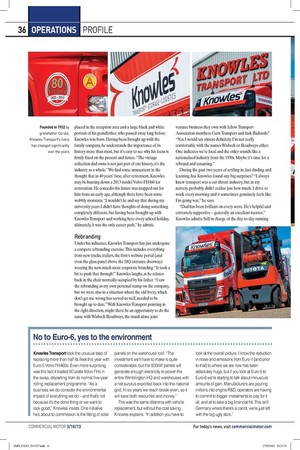 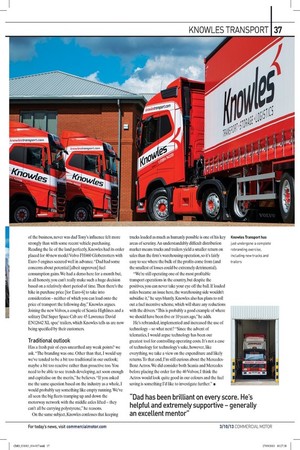 Page 26, 3rd October 2013 — Here's to you, kid
Close
Noticed an error?
If you've noticed an error in this article please click here to report it so we can fix it.

In an industry that some think has little or no prospects, it's nice to know the next generation of business leaders haven't been completely put off. CM catches up with Alex Knowles, set to take control of his family's transport and warehousing business By Tom Cunningham Alex was responsible for introducing the glass panel above the Knowles Transport HQ entrance doorway DOOM AND GLOOM is remarkably easy to conjure up on a damp, grey day. A head gasket's gone on one new truck, another's causing traffic chaos with a steer axle puncture and the bank manager's concerned with how

much the business is spending on diesel. What the workforce needs is the injection of some new blood. Then you meet Alex Knowles, a 23-year-old who's being groomed to take the reins of Knowles Transport, started by his grandfather Gerald in 1932.

Sharp, highly educated and well-spoken, Knowles is confident, yet lacking in arrogance. You can almost tell he's the progeny of a hard-working haulier. He could easily pass (on the phone at least) for someone 10 years older. There's nothing even remotely immature about his demeanor: it's almost a shock when you consider just seven years earlier, he would still have been at school. Brought in at 21, the business management graduate now holds the title of business development manager, helping to keep the wheels of the 75-strong fleet turning and the pallet spaces in 1.5 million ft2 of warehousing full.

We're keen to know how a 23-year-old sells a £30m turnover business and if, indeed, he's taken seriously by the huge food producing company's he's sitting in front of. "It can get quite dynamic. They know their business and they also know transport. It's a bit like the relationship I have here with my father: the right balance between youth and experience can be a winning formula. Despite the age of the person delivering it, the message remains the same; we work to build a long-term relationship with customers who understand service," he replies.

Based slap bang in the middle of the major growing, canning and packaging counties of Norfolk, Suffolk, Bedfordshire and Lincolnshire, Knowles's Cambridgeshire location is perfect to service the countless farms and factories on their immediate doorstep. Knowles reports 80% of the company's transport is dedicated to food distribution, and on the warehousing side it's 100%, made up (in the main) of canned goods and jams for large-scale catering. We head up to his father Tony's large office for a chat, past the 1960s classic Leyland gas turbine lorry strategically 1 Founded in 1932 by grandfather Gerald, Knowles Transport's livery has changed significantly over the years

placed in the reception area and a large black and white portrait of his grandfather, who passed away long before Knowles was born. Having been brought up with the family company, he understands the importance of its history more than most, but it's easy to see why his focus is firmly fixed on the present and future. "The vintage collection dad owns is not just part of our history, it's the industry as a whole." We find some amusement in the thought that in 40 years' time, after retirement, Knowles may be hunting down a 2013 model Volvo FH460 for restoration. He concedes his future was mapped out for him from an early age, although there have been some wobbly moments. "I wouldn't lie and say that during my university years I didn't have thoughts of doing something completely different, but having been brought up with Knowles Transport and working here every school holiday, ultimately, it was the only career path," he admits. Rebranding Under his influence, Knowles Transport has just undergone a compete rebranding exercise. This includes everything from new trucks, trailers, the firm's website portal (and even the glass panel above the HQ entrance doorway) wearing the new, much more corporate branding. "It took a bit to push that through!" Knowles laughs, as he relaxes back in the chair normally occupied by his father. "I saw the rebranding as my own personal stamp on the company, but we were also in a situation where the old livery, which don't get me wrong has served us well, needed to be brought up to date." With Knowles Transport pointing in the right direction, might there be an opportunity to do the same with Wisbech Roadways, the stand-alone joint venture business they own with fellow Transport Association members Gam Transport and Jack Richards? "Yes. I would say almost definitely. I'm not really comfortable with the names Wisbech or Roadways either. One indicates we're local and the other sounds like a nationalised industry from the 1950s. Maybe it's time for a rebrand and renaming

During the past two years of settling in, fact-finding and learning, has Knowles found any big surprises? "I always knew transport was a cut-throat industry, but in my naivety, probably didn't realise just how much. I drive to work every morning and it sometimes genuinely feels like I'm going war," he says. "Dad has been brilliant on every score. He's helpful and extremely supportive — generally an excellent mentor," Knowles admits. Still in charge of the day-to-day running

of the business, never was dad Tony's influence felt more strongly than with some recent vehicle purchasing. Reading the lie of the land perfectly, Knowles had its order placed for 40 new model Volvo FH460 Globetrotters with Euro-5 engines secured well in advance. "Dad had some concerns about potential [albeit unproven] fuel consumption gains. We had a demo here for a month but, in all honesty, you can't really make such a huge decision based on a relatively short period of time. Then there's the hike in purchase price [for Euro-61 to take into consideration — neither of which you can load onto the price of transport the following day," Knowles argues. Joining the new Volvos, a couple of Scania Highlines and a solitary Daf Super Space Cab are 45 Lawrence David EN12642 XL spec' trailers, which Knowles tells us are now being specified by their customers. Traditional outlook

Has a fresh pair of eyes unearthed any weak points? we ask. "The branding was one. Other than that, I would say we've tended to be a bit too traditional in our outlook; maybe a bit too reactive rather than proactive too. You need to be able to see trends developing, act soon enough and capitalise on the merits," he believes. "If you asked me the same question based on the industry as a whole, I would probably say something like empty running. We've all seen the big fleets tramping up and down the motorway network with the middle axles lifted — they can't all be carrying polystyrene," he reasons. On the same subject, Knowles confesses that keeping

trucks loaded as much as humanly possible is one of his key areas of scrutiny. An understandably difficult distribution market means trucks and trailers yield a smaller return on sales than the firm's warehousing operation, so it's fairly easy to see where the bulk of the profits come from (and the smallest of losses could be extremely detrimental).

"We're still operating one of the most profitable transport operations in the country, but despite the positives, you can never take your eye off the ball. If loaded miles became an issue here, the warehousing side wouldn't subsidise it," he says bluntly. Knowles also has plans to roll out a fuel incentive scheme, which will share any reductions with the drivers. "This is probably a good example of where we should have been five or 10 years ago," he adds. He's rebranded, implemented and increased the use of technology — so what next? "Since the advent of telematics, I would argue technology has been our greatest tool for controlling operating costs. It's not a case of technology for technology's sake, however, like everything, we take a view on the expenditure and likely returns. To that end, I'm still curious about the MercedesBenz Actros. We did consider both Scania and Mercedes before placing the order for the 40 Volvos; I think the Actros would look quite good in our colours and the fuel saving is something I'd like to investigate further." •