, News of the Week 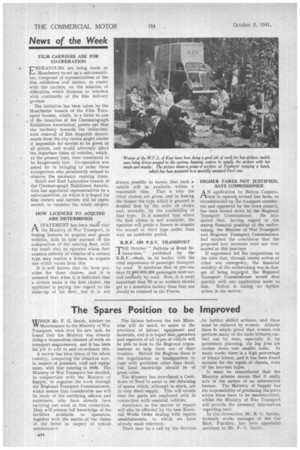 Page 16, 3rd October 1941 — , News of the Week
Close
Noticed an error?
If you've noticed an error in this article please click here to report it so we can fix it.

FILM CARRIERS ASK FOR CO-OPERATION • NDEAVOURS are being made at Le Manchester to set up a sub-committee, composed of representatives of the film exhibitors and renters, to confer with the carriers, on the solution of difficulties which threaten to interfere with continuity of the film delivery services.

The initiative has been taken by the Manchester branch of the Film Transport Society, which, in a letter to one of the branches of the Cinematograph Exhibitors Association; points out that the tendency towards the indiscriminate removal of film despatch departments from the city centre might render it impossible for service to be given at all points, and would adversely affect the departure times of vehicles, which, at the present time, were considered to be dangerously late. Co-operation was asked for in bringing to order those transporters who persistently refused to observe the necessary running times.

South and East Lancashire branch of the Cinematograph Exhibitors Association has appointed representatives to a sub-committee, on which it is hoped the film renters and carriers will be represented, to examine the whole subject.

ASTATEMENT has been made' that the Ministry of War Transport, in issuing licences to acquire new goods vehicles, fails to take account cif the composition of the existing fleet, with the result that an operator whose fleet consists entirely of vehicles of a certain type may receive a licence to acquire one which varies from this.

It is well known that the form provides for three choices, and it is assumed that when it is indicated that a certain make is the first choice, the applicant is paying due regard to the make-up of his fleet, but it is not always possible to ensure that such a vehicle will be available within a reasonable time. That is why the other choices are given, and in issuing the licence the type which is granted is decided first by the order of choice and, secondly, by the availability of that type. It is assumed that where the first choice is not available, the operator will prefer a licence to acquire the second or third type rather than wait an indefinite period.

B.R.F. ON P.S.V. TRANSPORT THE October " Bulletin of Road Information," published by the

adeals, in its leader, with the vital importance of passenger transport by road. It mentions that in pre-war days 12,g0co00.000 passengers were-carried annually by road. Now, .it is more important that 70 or so workers should get to a munition factory than that, one should be retained in the Forces.

AN application by Bolton Corporation to operate, revised bus fares, as recommended by the transport committee and approved by the town council, has been turned down by the Regional Transport Commissioner. He intimated that, having regard to the strong financial position of the undertaking, the Minister of War Transport and Regional Transport Commissioner had reached the conclusion that the proposed fare increases were not warranted at this juncture.

If experience led he corporation to the view that, through 'enemy action or other. war .emergency, the financial stability of the undertaking was in danger of being impaired, the Regional Transport Commissioner would deal quickly with any application made to him. Bolton is taking no further action in the matter.