The four of cabs 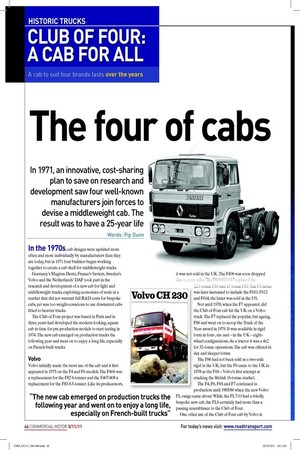 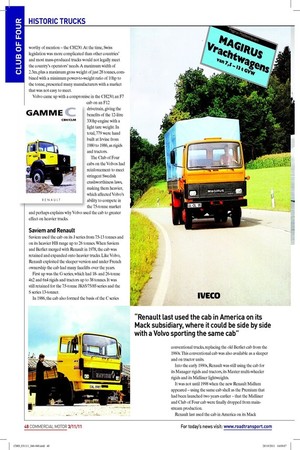 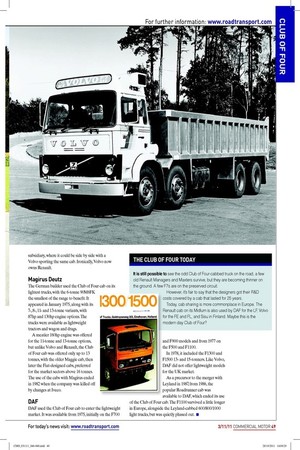 Page 38, 3rd November 2011 — The four of cabs
Close
Noticed an error?
If you've noticed an error in this article please click here to report it so we can fix it.

In 1971, an innovative, cost-sharing plan to save on research and development saw four well-known manufacturers join forces to devise a middleweight cab. The result was to have a 25-year life

Words: Pip Dunn In the 1970s, cab designs were updated more often and more individually by manufacturers than they are today, but in 1971 four builders began working together to create a cab shell for middleweight trucks.

Germany’s Magirus Deutz, France’s Saviem, Sweden’s Volvo and the Netherlands’ DAF took part in the research and development of a new cab for light and middleweight trucks, exploiting economies of scale in a market that did not warrant full R&D costs for bespoke cabs, yet was too weight-conscious to use downsized cabs itted to heavier trucks.

The Club of Four project was based in Paris and in three years had developed the modern-looking, square cab in time for pre-production models to start testing in 1974. The new cab emerged on production trucks the following year and went on to enjoy a long life, especially on French-built trucks.

Not until 1978, when the F7 appeared, did the Club of Four cab hit the UK on a Volvo truck. The F7 replaced the popular, but ageing, F86 and went on to scoop the Truck of the Year award in 1979. It was available in rigid form in four-, sixand – in the UK – eightwheel conigurations. As a tractor it was a 4x2 for 32-tonne operations. The cab was offered in day and sleeper forms.

The F4, F6, F6S and F7 continued in production until 1985/86 when the new Volvo FL range came about. While the FL7/10 had a wholly bespoke new cab, the FL6 certainly had more than a passing resemblance to the Club of Four.

One other use of the Club of Four cab by Volvo is worthy of mention – the CH230. At the time, Swiss legislation was more complicated than other countries’ and most mass-produced trucks would not legally meet the country’s operators’ needs. A maximum width of 2.3m, plus a maximum gross weight of just 28 tonnes, combined with a minimum power-to-weight ratio of 10hp to the tonne, presented many manufacturers with a market that was not easy to meet.

The Club of Four cabs on the Volvos had reinforcement to meet stringent Swedish crashworthiness laws, making them heavier, which affected Volvo’s ability to compete in the 7.5-tonne market and perhaps explains why Volvo used the cab to greater effect on heavier trucks.

Saviem used the cab on its J series from 7.5-13 tonnes and on its heavier HB range up to 26 tonnes. When Saviem and Berliet merged with Renault in 1978, the cab was retained and expanded onto heavier trucks. Like Volvo, Renault exploited the sleeper version and under French ownership the cab had many facelifts over the years.

In 1986, the cab also formed the basis of the C series conventional trucks, replacing the old Berliet cab from the 1960s. This conventional cab was also available as a sleeper and on tractor units.

Into the early 1990s, Renault was still using the cab for its Manager rigids and tractors, its Maxter multi-wheeler rigids and its Midliner lightweights.

It was not until 1998 when the new Renault Midlum appeared – using the same cab shell as the Premium that had been launched two years earlier – that the Midliner and Club of Four cab were inally dropped from mainstream production.

Renault last used the cab in America on its Mack subsidiary, where it could be side by side with a Volvo sporting the same cab. Ironically, Volvo now owns Renault.

The German builder used the Club of Four cab on its lightest trucks, with the 6-tonne 90M6FK the smallest of the range to beneit. It appeared in January 1975, along with its 7-, 8-, 11and 13-tonne variants, with 87hp and 130hp engine options. The trucks were available as lightweight tractors and wagon and drags.

A meatier 160hp engine was offered for the 11-tonne and 13-tonne options, but unlike Volvo and Renault, the Club of Four cab was offered only up to 13 tonnes, with the older Maggie cab, then later the Fiat-designed cabs, preferred for the market sectors above 16 tonnes.

The use of the cabs with Magirus ended in 1982 when the company was killed off by changes at Iveco.

As a precursor to the merger with Leyland in 1987, from 1986, the popular Roadrunner cab was

available to DAF, which ended its use of the Club of Four cab. The F1100 survived a little longer in Europe, alongside the Leyland-cabbed 600/800/1000 light trucks, but was quietly phased out. ■