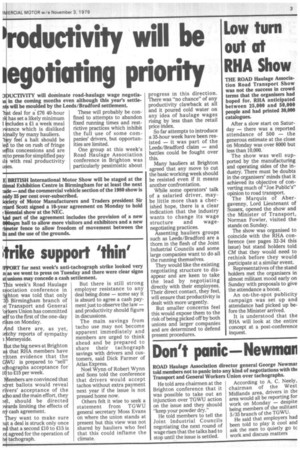 ROAD Haulage Association director general George Newmar told members not to panic into any kind of negotiations with Um Transport and General Workers Union over tachographs.

He told area chairmen at the Brighton conference that it was possible to take out an injunction over TGWU action on the issue and they should "keep your powder dry."

He told members to tell the Joint Industrial Councils negotiating the next round of wage rises that the talks had to stop until the issue is settled. According to A. C. Neely, chairman of the West Midlands area, drivers in the area would all be reporting for work on Monday — despite being members of the militant 5/35 branch of the TGWU. He said that employers had been told to play it cool and ask the men to quietly go tc work and discuss matters