A Time for Change? 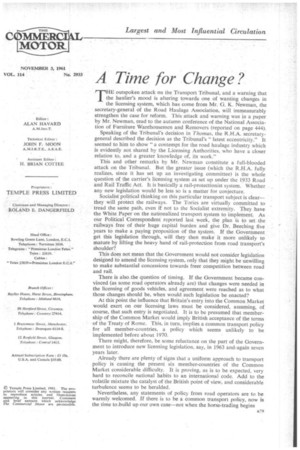 Page 33, 3rd November 1961 — A Time for Change?
Close
Noticed an error?
If you've noticed an error in this article please click here to report it so we can fix it.
Keywords : Road Haulage Association, Salter Report, Politics, Business / Finance

THE outspoken attack on the Transport Tribunal, and a warning that the haulier's mood is altering towardsone of wanting changes in the licensing system, which has come from Mr. G. K. Newman, the secretary-general of the Road Haulage Association, will immeasurably strengthen the case for reform. This attack and warning was in a paper by Mr. Newman, read to the autumn conference of the National Association of Furniture Warehousemen and Removers (reported on page 444). Speaking of the Tribunal's decision in Thomas, the R.H.A. secretarygeneral described the decision as the Tribunal's "latest eccentricity." It seemed to him to show "a contempt for Ole road haulage industry which is evidently not shared by the Licensing Authorities, who have a closer relation to, and a greater knowledge of, its work."

This and other remarks by Mr. Newman constitute a full-blooded attack on the Tribunal. But the greater issue (which the R.H.A. fully realizes, since it has set up an investigating committee) is the whole question of the carrier's licensing system as set up under the 1933 Road and Rail Traffic Act. It is basically a rail-protectionist system. Whether any new legislation would be less so is a matter for conjecture.

Socialist political thinking on this particular transport subject is clear— they will protect the railways. The Tories are virtually committed to tread the same path, even if not to the Socialist extremity. They have the White Paper on the nationalized transport system to implement. As our Political Correspondent reported last week, the plan is to set the railways free of their huge capital burden and give Dr. Beechirig five years to make a paying proposition of the system. If the Government get this legislation through, will they then make it more unlikely to mature by lifting the heavy hand of rail-protection from road transport's shoulder?

This does not mean that the Government would not consider legislation designed to amend the licensing system, only that they might be unwilling to make substantial concessions towards freer competition between road and rail.

There is also,the question of timing. If the Government became convinced (as some road operators already are) that changes were needed in the licensing of goods vehicles, and agreement were reached as to what those changes should be, when would such legislation be enacted?

At this point the influence that Britain's entry into the Common Market would exert on our licensing laws must be considered, assuming, of course, that such entry is negotiated. It is to be presumed that membership of the Common Market would imply British acceptance of the terms of the Treaty of Rome. This, in turn, implies a common transport policy for all member-countries, a policy which seems unlikely to be implemented before about 1970.

There might, therefore, be some reluctance on the part of the Government to introduce new licensing legislation, say, in 1963 and.again seven years later.

Already there are plenty of signs that a uniform approach to transport policy is causing the present six member-countries of the Common Market considerable difficulty. It is proving, as is to be expected, very hard to reconcile national habits to an international code. Add to the volatile mixture the catalyst of the British point of view, and considerable turbulence seems to be heralded.

Nevertheless, any statements of policy from road operators are to be warmly welcomed. If there is to be a common transport policy, now is the time to.build up our own case—not when the horse-trading begins