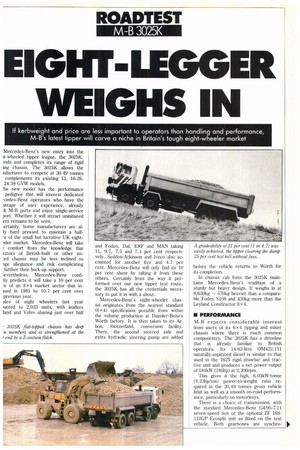 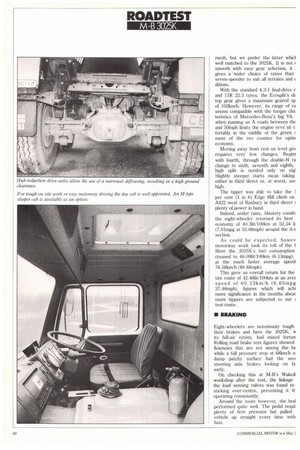 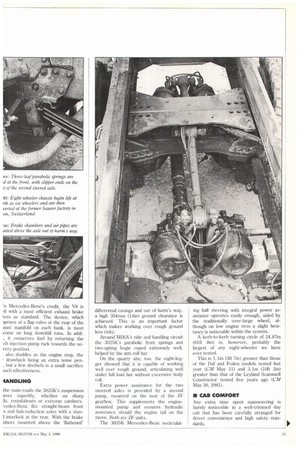 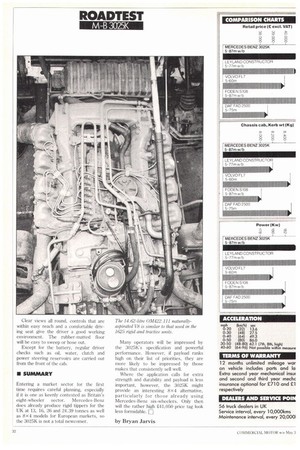 If kerbweight and price are less important to operators than handling and performance, M-B's latest tipper will carve a niche in Britain's tough eight-wheeler market

he new model has the performance pedigree that will interest dedicated rcedes-Benz operators who have the antage of user experience, already M-B parts and enjoy single-service port. Whether it will attract uninitiated ers remains to be seen.

:ertainly, home manufacturers are ally hard pressed to maintain a halfT of the small but lucrative UK eighteler market Mercedes-Benz will take comfort from the knowledge that rators of British-built or other imkd chassis may be less inclined to age allegiance and risk complicating further their back-up support.

levertheless, Mercedes-Benz confitly predicts it will take a 10 per cent :e of an 8x4 market sector that inised in 1985 by 10.7 per cent over previous year.

ales of eight wheelers last year iunted to 2,033 units, with leaders land and Volvo sharing just over half and Foden, Daf, ERF and MAN taking 11, 9.7, 7.5 and 7.3 per cent respectively. Seddon-Atkinson and Iveco also accounted for another five and 4.7 per cent. Mercedes-Benz will only find its 10 per cent share by taking it from these others. Certainly from the way it performed over our new tipper test route, the 3025K has all the credentials necessary to put it in with a shout.

Mercedes-Benz's eight-wheeler chassis originates from the nearest standard (6x4) specification possible from within the volume production at Daimler-Benz's Worth factory. It is then taken to its Arbon, Switzerland, conversion facility. There, the second steered axle and extra hydraulic steering pump are added before the vehicle returns to WOrth for its completion.

In chassis cab form the 3025K maintains Mercedes-Benz's tradition of a sturdy but heavy design. It weighs in at 8,630kg — 570kg heavier than a comparable Foden 8108 and 430kg more than the Leyland Constructor 8<4.

• PERFORMANCE M-B expects considerable interest from users of its 6 ><4 tipping and mixer chassis where there is much common conaponentry. The 3025K has a driveline that is already familiar to British operators. Its 14.62-litre 0M422.111 naturally-aspirated diesel is similar to that used in the 1625 rigid drawbar and tractive unit and produces a net power output of 184kW (246hp) at 2,300rpm.

This gives it the high, 6.03kW/tonne (8.23hp/ton) power-to-weight ratio required at the 30.49 tonnes gross vehicle limit as well as a smooth on-road performance, particularly on motorways.

There is a choice of transmission, with the standard Mercedes-Benz G4/95-7/11 seven-speed box or the optional 2F 16S112GP Ecosplit unit as fitted on the test vehicle. Both gearboxes are synchro mesh, but we prefer the latter whicl well matched to the 3025K. It is not smooth with easy gear selection, it . gives a wider choice of ratios than seven-speeder to suit all terrains and ( ditions.

With the standard 4.3:1 final-drive r and 11R 22.5 tyres, the Ecosplit's top gear gives a maximum geared sp of 1021cm/h. However, its range of ra seems compatible with the torque cha teristics of Mercedes-Benz's big V8, when running on A roads between the and 50mph limits the engine revs sit c fortably in the middle of the green ment of the rev counter for optin economy.

Moving away from rest on level gro requires very few changes. Begim with fourth, through the double-H ra change to sixth, seventh and eighth, high split is needed only on eigl Slightly steeper starts mean taking either in third direct or, at worst, sec high.

The tipper was able to take the I per cent (1 in 6) Edge Hill climb on A422 west of Banbury in third direct i plenty of power in hand.

This gave an overall return for the tire route of 42.481it/100Iun at an avet speed of 6 0.2 3km/h (6.65mpg 37.46mph), figures which will achi more significance in the months aheat more tippers are subjected to our t test route.

• BRAKING Eight-wheelers are notoriously tough their brakes and here the 3025K, vt its full-air sytem, had mixed fortun Rolling road brake test figures showed ficiencies that are not among the be while a full pressure stop at 68km/h damp patchy surface had the sect steering axle brakes locking on fa early.

On checking this at M-B's Wakeii workshop after the test, the linkage the load sensing valves was found to sticking over-centre, preventing it fr operating consistently.

Around the route however, the bra] performed quite well. The pedal requi plenty of firm pressure but pulled vehicle up straight every time with fuss. 'o Mercedes-Benz's credit, the V8 is mi with a most efficient exhaust brake tern as standard. The device, which Iprises of a flap valve at the rear of the aust manifold on each bank, is most come on long downhill runs. In addi, it conserves fuel by returning the zh injection pump rack towards the novery position.

also doubles as the engine stop, the drawback being an extra noise pen, but a few decibels is a small sacrifice 3uch effectiveness.

the main roads the 3025K's suspension ayes superbly, whether on sharp rls, roundabouts or extreme cambers. -cedes-Benz fits straight-beam front s and hub-reduction axles with a stanI interlock at the rear. With the brake nbers mounted above the 'flattened'

differential casings and out of harm's way, a high 354mni (14in) ground clearance is achieved. This is an important factor which makes working over rough ground less risky.

On the quarry site, too, the eight-legger showed that it is capable of working well over rough ground, articulating well under full load but without excessive body roll.

Extra power assistance for the two steered axles is provided by a second pump, mounted on the rear of the ZF gearbox. 'rhis supplements the enginemounted pump and ensures hydraulic assistance should the engine fail on the move. Both are ZF units.

ing ball steering with integral power assistance operates easily enough, aided by the traditionally over-large wheel, although on low engine revs a slight hesitancy is noticeable within the system.

A kerb-to-kerb turning circle of 24.87m (81ft 8in) is, however, probably the largest of any eight-wheeler we have ever tested.

• CAB COMFORT Any extra time spent manoeuvring is barely noticeable in a well-trimmed day cab that has been carefully arranged for driver convenience and high safety standards. Clear views all round, controls that are within easy reach and a comfortable driving seat give the driver a good working environment. The rubber-matted floor will be easy to sweep or hose out.

Except for the battery, regular driver checks such as oil, water, clutch and power steering reservoirs are carried out from the front of the cab.

Entering a market sector for the first time requires careful planning, especially if it is one as keenly contested as Britain's eight-wheeler sector. Mercedes-Benz does already produce rigid tippers for the UK at 13. 16, 26 and 24.39 tonnes as well as 8 x 4 models for European markets, so the 3025K is not a total newcomer. Many operators will be impressed by the 3025K's specification and powerful performance. However, if payload ranks high on their list of priorities, they are more likely to be impressed by those makes that consistently sell well.

Where the application calls for extra strength and durability and payload is less important, however, the 3025K might provide an interesting 8x4 alternative, particularly for those already using Mercedes-Benz six-wheelers. Only then will the rather high £41,050 price tag look less formidable.