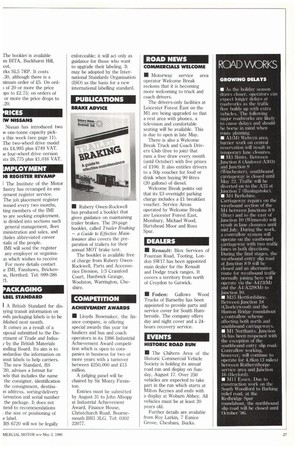 Page 27, 3rd May 1986 — KDAD WORKS
Close
Noticed an error?
If you've noticed an error in this article please click here to report it so we can fix it.

GROWING DELAYS • As the holiday season draws closer, operators can • expect longer delays at roadworks as the traffic flow builds up with extra vehicles. The following major niadworks are likely to cause delays and should be borne in mind when nage planning.

(Winchester), southbound carriageway is closed until Nlay 22. Traffic will be diverted on to the A33 at Junction 7 (Basingstoke).

Carriageway repairs on the westbound section of the M-1 between Junctions 8.9 (Bray) and to the east of Junction 10 (Winnersh) will result in lane closures until mid July. Iluring the work, a contrailmsystem will operate on the eastbound carriageway with two traffic lanes in both directions. Dining the final stages, the westbound entry slip road at Junction 8 9 will be closed and an alternative route for westbound traffic normally joining here will operate via the A423(M) and the MA329(M) to Junction 10.

• M1 Northants. Junction 16 has been reopened with the exception of the southbound entry slip road. Contraflow working, however, will continue to operate for 4.8km (3 miles) between Rotherstb9rpe service area and-Junction 16 (Heyford).

• M1 1 Essex. Due to construction work on the South Woodford to Barking relief road, at the Redbridge Spur roundabout, the northbound slip road will be closed until October '86.