• Light but bulky cargoes entail their own problems for 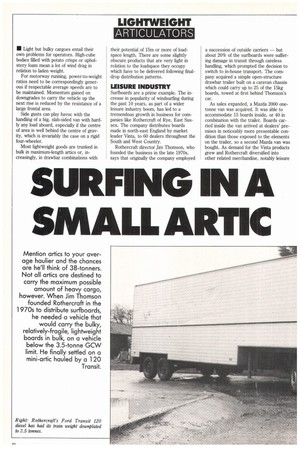 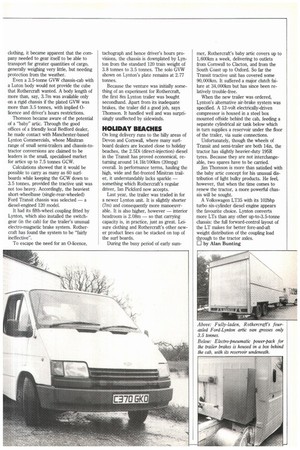 For motorway running, power-to-weight ratios need to be correspondingly generous if respectable average speeds are to be maintained. Momentum gained on downgrades to carry the vehicle up the next rise is reduced by the resistance of a large frontal area.

Side gusts can play havoc with the handling of a big, slab-sided van with hardly any load aboard, especially if the centre of area is well behind the centre of gravity, which is invariably the case on a rigid four-wheeler.

Most lightweight goods are trunked in bulk in maximum-length artics or, increasingly, in drawbar combinations with their potential of 15m or more of loadspace length. There are some slightly obscure products that are very light in relation to the loadspace they occupy which have to be delivered following finaldrop distribution patterns.

Surfboards are a prime example. The increase in popularity of windsurfing during the past 10 years, as part of a wider leisure industry boom, has led to a tremendous growth in business for companies like Rothercraft of Rye, East Sussex. The company distributes boards made in north-east England by market leader Vinta, to 60 dealers throughout the South and West Country.

Rothercraft director Jim Thomson, who founded the business in the late 1970s, says that originally the company employed a succession of outside carriers — but about 20% of the surfboards were suffering damage in transit through careless handling, which prompted the decision to switch to in-house transport. The company acquired a simple open-structure drawbar trailer built on a caravan chassis which could carry up to 25 of the 15kg boards, towed at first behind Thomson's car.

As sales expanded, a Mazda 2000 onetonne van was acquired. It was able to accommodate 15 boards inside, or 40 in combination with the trailer. Boards carried inside the van arrived at dealers' premises in noticeably more presentable condition than those exposed to the elements on the trailer, so a second Mazda van was bought. As demand for the Vinta products grew and Rothercraft diversified into other related merchandise, notably leisure clothing, it became apparent that the company needed to gear itself to be able to transport far greater quantities of cargo, generally weighing very little, but needing protection from the weather.

Even a 3.5-tonne GVW chassis-cab with a Luton body would not provide the cube that Rothercraft wanted. A body length of more than, say, 3.7m was available only on a rigid chassis if the plated GVW was more than 3.5 tonnes, with implied 0licence and driver's hours restrictions.

Thomson became aware of the potential of a "baby" artic. Through the good offices of a friendly local Bedford dealer, he made contact with Manchester-based Lynton Commercials, whose Minitran range of small semi-trailers and chassis-totractor conversions are claimed to be leaders in the small, specialised market for artics up to 7.5 tonnes GCW.

Calculations showed that it would be possible to carry as many as 60 surfboards while keeping the GCW down to 3.5 tonnes, provided the tractive unit was not too heavy. Accordingly, the heaviest short-wheelbase (single-rear-wheeled) Ford Transit chassis was selected — a diesel-engined 120 model, It had its fifth-wheel coupling fitted by Lynton, which also installed the switchgear (in the cab) for the trailer's unusual electro-magnetic brake system. Rothercraft has found the system to be "fairly ineffective".

To escape the need for an 0-licence, tachograph and hence driver's hours provisions, the chassis is downplated by Lynton from the standard 120 train weight of 3.8 tonnes to 3.5 tonnes. The solo GVW shown on Lynton's plate remains at 2.77 tonnes.

Because the venture was initially something of an experiment for Rothercraft, the first 8m Lynton trailer was bought secondhand. Apart from its inadequate brakes, the trailer did a good job, says Thomson. It handled well and was surprisingly unaffected by sidewinds.

On long delivery runs to the hilly areas of Devon and Cornwall, where many surfboard dealers are located close to holiday beaches, the 2.5Di (direct-injection) diesel in the Transit has proved economical, returning around 14.11it/100km (20mpg) overall. In performance terms, hauling the high, wide and flat-fronted Minitran trailer, it understandably lacks sparkle — something which Rothercraft's regular driver, Ian Pickford now accepts.

Last year, the trailer was traded in for a newer Lynton unit. It is slightly shorter (7m) and consequently more manoeuvrable. It is also higher, however — interior headroom is 2.08m — so that carrying capacity is, in practice, just as great. Leisure clothing and Rothercraft's other newer product lines can be stacked on top of the surf boards.

During the busy period of early sum mer, Rothercraft's baby artic covers up to 1,6001cm a week, delivering to outlets from Cornwall to Clacton, and from the South Coast up to Oxford. So far the Transit tractive unit has covered some 90,000Icm. It suffered a major clutch failure at 34,000Ian but has since been relatively trouble-free.

When the new trailer was ordered, Lynton's alternative air-brake system was specified. A 12-volt electrically-driven compressor is housed in a steel box mounted offside behind the cab, feeding a separate cylindrical air tank below which in turn supplies a reservoir under the floor of the trailer, via suzie connections.

Unfortunately, though the wheels of Transit and semi-trailer are both 14in, the tractor has slightly heavier-duty 195R tyres. Because they are not interchangeable, two spares have to be carried.

Jim Thomson is more than satisfied with the baby artic concept for his unusual distribution of light bulky products. He feel, however, that when the time comes to renew the tractor, a more powerful chassis will be sought.

A Volkswagen LT35 with its 102bhp turbo six-cylinder diesel engine appears the favourite choice. Lynton converts more LTs than any other up-to-3.5-tonne chassis: the full forward-control layout of the LT makes for better fore-and-aft weight distribution of the coupling load through to the tractor axles.