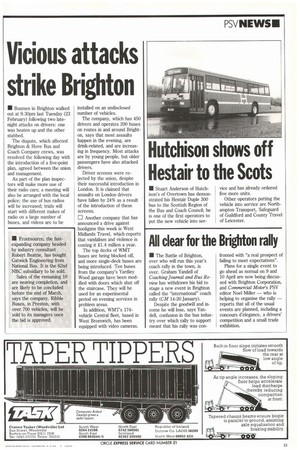 Page 15, 3rd March 1988 — Vicious attacks strike Brighton
Close
Noticed an error?
If you've noticed an error in this article please click here to report it so we can fix it.

• Busmen in Brighton walked out at 9.30pm last Tuesday (23 February) following two latenight attacks on drivers: one was beaten up and the other stabbed.

The dispute, which affected Brighton & Hove Bus and Coach Company crews, was resolved the following day with the introduction of a five-point plan, agreed between the union and management.

As part of the plan inspectors will make more use of their radio cars; a meeting will also be arranged with the local police; the use of bus radios will be increased; trials will start with different makes of radio on a large number of buses, and videos are to be installed on an undisclosed number of vehicles.

The company, which has 450 drivers and operates 200 buses on routes in and around Brighton, says that most assaults happen in the evening, are drink-related, and are increasing in frequency. Most attacks are by young people, but older passengers have also attacked drivers.

Driver screens were rejected by the union, despite their successful introduction in London. It is claimed that assaults on London drivers have fallen by 24% as a result of the introduction of these screens.

Another company that has announced a drive against hooligans this week is West Midlands Travel, which reports that vandalism and violence is costing it £1.4 million a year.

The top decks of WMT buses are being blocked off, and more single-deck buses are being introduced. Ten buses from the company's Yardley Wood garage have been modified with doors which shut off the staircase. They will be used for an experimental period on evening services in problem areas.

In addition, WMT's 174vehicle Central fleet, based in West Bromwich, has been equipped with video cameras.