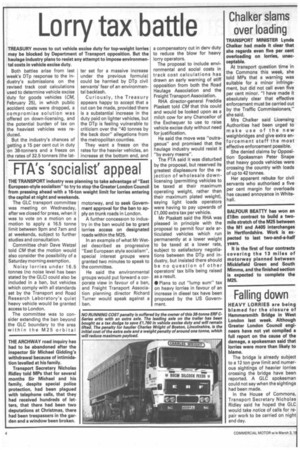 Page 6, 3rd March 1984 — Falling down
Close
Noticed an error?
If you've noticed an error in this article please click here to report it so we can fix it.
Keywords : Thames Path, Truck, Hammersmith Bridge, Goldie Lookin Chain

HEAVY LORRIES are being blamed for the closure of Hammersmith Bridge in West London last week. Although Greater London Council engineers have not yet compiled a full report on the cause of the damage, a spokesman said that lorries were more than likely to blame.

The bridge is already subject to a 12 ton gvw limit and numerous sightings of heavier lorries crossing the bridge have been reported. A GLC spokesman could not say when the sightings had been made.

In the House of Commons, Transport Secretary Nicholas Ridley said he hoped the GLC would take notice of calls for repair work to be carried on night and day.