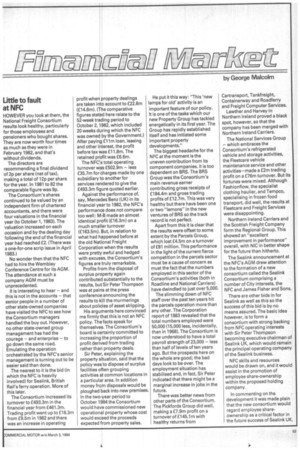 Little to fault at NFC

HOWEVER you look at them, the National Freight Consortium results look healthy, particularly for those employees and pensioners who bought shares. They are now worth four times as much as they were in February 1982, and that's without dividends.

The directors are recommending a final dividend of 2p per share (net of tax), making a total of 12p per share for the year. In 1981 to 82 the comparable figure was 9p. The Consortium's shares continued to be valued by an independent firm of chartered accountants, and there were four valuations in the financial year (to October 1, 1983). The valuation increased on each occasion and by the dealing day following the end of the financial year had reached £2. (There was a one-for-one scrip issue in April 1983.) No wonder then that the NFC had to hire the Wembley Conference Centre for its AGM. The attendance at such a company AGM must be unprecedented.

It is interesting to hear — and this is not in the accounts — that senior people in a number of other state-owned companies have visited the NFC to see how the Consortium managers handled the buy out. However, no other state-owned group management has had the courage — and enterprise — to go down the same road. Emulating the operation orchestrated by the NFC's senior management is turning out to be easier said than done.

The nearest to it is the bid (in which the NFC is heavily involved) for Sealink, British Rail's ferry operation. More of this later.

The Consortium increased its turnover to £493.3m in the financial year from £461.3m. Trading profit went up to £16.3m from £9.5m in 1982 and there was an increase in operating profit when property dealings are taken into account to £22.8m (£14.6m). (The comparative figures stated here relate to the 52-week trading period to October 2, 1982, which included 20 weeks during which the NFC was owned by the Government.) After paying £11m loan, leasing and other interest, the profit before tax was £11.8m. The retained profit was £6.6m.

The NFC's total operating turnover was £502.9m — less £35.7m for charges made by one subsidiary to another for services rendered to give the £493.3m figure quoted earlier.

Against the performance of, say, Mercedes Benz (UK) in its financial year to 1982, the NFC's performance does not compare too well: M-B made an almost identical profit (£16.3m) on a much smaller turnover (£163.5m), But, in relation to what had happened before at the old National Freight Corporation when the results were pretty awful and hedged with excuses, the Consortium's figures are truly remarkable.

Profits from the disposal of surplus property again contributed substantially to the results, but Sir Peter Thompson was at pains at the press conference announcing the results to kill the murmerings about policies of asset stripping.

His arguments here convinced me firmly that this is not an NEC policy. The facts speak for themselves. The Consortium's board is certainly committed to increasing the proportion of profit derived from trading rather than property deals.

Sir Peter, explaining the property situation, said that the policy was to dispose of surplus facilities often grouping activities at common locations in a particular area. In addition money from disposals would be ploughed back into new premises. In the two-year period to October 1984 the Consortium would have commissioned new operational property whose cost would exceed the proceeds expected from property sales. He put it this way: "This 'new lamps for old' activity is an important feature of our policy. It is one of the tasks which our new Property Group has tackled energetically in its first year. The Group has rapidly established itself and has initiated some important property developments."

The biggest headache for the NFC at the moment is the uneven contribution from its component companies. It is too dependent on BRS. The BRS Group was the Consortium's main revenue earner contributing gross receipts of £184.4m and gross trading profits of £12.7m. This was very healthy but there have been one or two "lemons" in the new ventures of BRS so the track record is not perfect.

Apart from this it is clear that the results were offset to some extent by the Parcels Group, which lost £4.5m on a turnover of £81 million. This performance in the light of the current fierce competition in the parcels sector must be a cause of concern as must the fact that the numbers employed in this sector of the Consortium's activities (both in Roadline and National Carriers) have dwindled to just over 5,000.

The slimming down of NFC staff over the past ten years hit the parcels operation more than any other. The Corporation report of 1983 revealed that the total numbers employed were 50,000 (15,000 less, incidentally, than in 1968). The Consortium is now understood to have a total payroll strength of 23,000 — less than half of levels of ten years ago. But the prospects here on the whole are good; the bad days look to be over. The employment situation has stabilised and, in fact, Sir Peter indicated that there might be a marginal increase in jobs in the future.

There was better news from other parts of the Consortium. The Pickfords Group did well, making a £7.9m profit on a turnover of £145.1m with healthy returns from Cartransport, Tankfreight, Containerway and Roadferry and Freight Computer Services.

The National Services Group — which embraces the Consortium's refrigerated vehicle and storage activities, the Fleetcare vehicle maintenance service and other activities—made a £2m trading profit on a £76m turnover. But its fortunes were mixed. Although Fashionflow, the specialist clothing haulier, and Tempco, specialising in frozen food transport, did well, the results at Fleetcare and Freight Services were disappointing.

Northern Ireland Carriers and the Scottish Freight Company form the Regional Group. This showed an "excellent improvement in performance" overall, with NIC in better shape for the future than hitherto.

The Sealink announcement at the NFC's AGM drew attention to the formation of a new consortium called the Sealink Consortium comprising a number of City interests, the NFC and James Fisher and Sons.

There are other bids in for Sealink as well as this so the success of this bid is by no means assured. The basic idea however, is to form a consortium with strong backing from NEC operating interests with Sir Peter Thompson becoming executive chairman of Sealink UK, which would remain the principal operating company of the Sealink business.

NFC skills and resources would be drawn on, and it would assist in the promotion of employee share-ownership within the proposed holding company.

In commenting on the development it was made plain that the new consortium would regard employee shareownership as a critical factor in the future success of Sealink UK.