A Side and Rear Tipping Gear 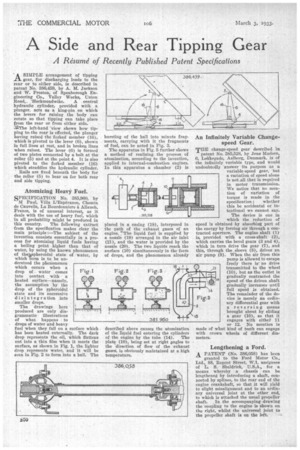 Page 68, 3rd March 1933 — A Side and Rear Tipping Gear
Close
Noticed an error?
If you've noticed an error in this article please click here to report it so we can fix it.
Keywords : English Inventions, Propellers, Internal Combustion Engine, Transmission

ASIMPL-P1 arrangement of tipping gear, for discharging loads to the rear or to either side, is described in patent No. 386,459, by A. M. Jackson and W. Preston, of Spenborough Engineering Co., Valley Works, Union

Road„ 'Beckanondwike. A central hydraulic cylinder, provided with a plunger, acts as a king-pin on which the levers for raising the body can rotate so that tipping can take place from the rear or from either side.

The left-hand "view shows how tipping to the rear is effected, the plunger having raised the forked member (16), which is pivoted to the lever (6), shown in full lines at rest, and in broken lines when raised. The lever (6) is farmed of two plates connected by a bolt at the roller (5) and at the point 4. It is also pivoted to the forked member (16) which straddles the hydraulic cylinder. " Rails are fixed beneath the body for the roller (5) to bear on for both rear and side tipping.

SPECIFICATION No. 385,960, by M Paul, Villa L'Esperanee, Chemin de Cauvelle, La Bourdonniere a Allauch, Prance, is of unusual interest, as it deals with the nse of heavy fuel, which in all probability might be produced in this country. The following extract from the specification makes clear the main principle :—The subject of the invention consists essentially in a process far atomizing liquid fuels having a boiling point higher than that of water, by using the known phenomenon of thekspheroidal• state of water, by which Term is to be understood the phenomenon which occurs when a drop of water comes into contact with a heated surface—namely, the assumption by the drop of the spheroidal state and its successive disintegration into smaller drops.

The • drawings here produced are only diagrammatic illustrations of what happens to drops of water and heavy fuel when they fall on a surface which has been heated externally. The dark drop represents the oil, which flattens out into a thin film when it meets the surface, as shown in Fig. 1, the lighter drop represents water, and it will be seen in Fig. 2 to form into a ball. The

bursting of the bail into minute fragments, carrying with it the fragments of fuel, can be noted in Fig. 2.

The apparatus in rig. 5 further shows a method of realizing the process of atomization, according to the invention, applied to internal-combustion engines. In this apparatus a chamber (2) is

placed in a casing (18), interposed in the path of the exhaust gases of an engine. 7/The liquid fuel is supplied by a nozzle (19) arranged in the air inlet (21), and the water is provided by the nozzle (20). The two liquids reach the surface (10) simultaneously in the form of drops, and the phenomenon already

described above causes the atomization of the liquid fuel entering the cylinders of the engine by the tube (14). The plate (10), being set at right wagles to the direction of flow of the exhaust gases, is obviously maintained at a high temperature.

THE change-speed gear described ln patent No. 385,528, by Jens Madsen, 6, Lokkegade, Aalborg, Denmark, is of the infinitely variable type, and would undoubtedly -answer its purpose as a variable-speed gear, but a variation of speed alone is not all that is required in motor transmission. We notice that no mention of variation of torque is made in the specification ; whether this be accidental or intentional we cannot say.

The device is one in which the reduction of speed is obtained by absorbing part of the energy by forcing air through a contracted aperture. The engine shaft (1) is, provided with a cross-shaft (2), which carries the bevel gears (3 and 4), which in turn drive the gear (7), and this, through the sleeve (8), drives an air pump (9). When the air from this

pump is allowed to escape freely there is. no drive transmitted to the wheel (10), but as the outlet is gradually contracted the speed of the driven shaft gradually increases until full .speed is obtained. The remainder of the device is merely an ordinary differential gear with a reversing means brought about by sliding a gear (10), so that it engages with either 11

or 12. No mention is made of what kind of teeth can engage with crown wheels of different diameters.

Lengthening a Ford. A PATENT (No. 386,058) has been granted to the Ford .Motor Co., Ltd., 88, Regent Street, W.1, assignees of L. S. Slaeldrick, U.S.A., for a means whereby a chassis can be lengthened by introducing a shaft, connected by splines, to the rear end of the engine crankshaft, so that it will yield to slight misalignment and to an ordinary universal joint at the other end, to which is attached the usual propeller shaft. In the accompanying drawing the coupling to the engine is shown on the right, whilst the universal joint to the propeller shaft is on the left.