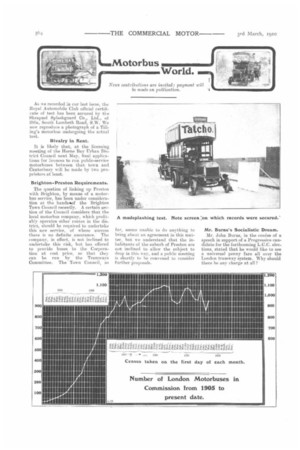 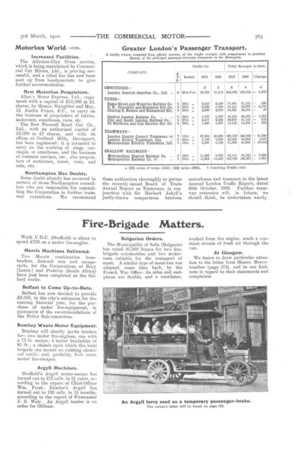 Page 8, 3rd March 1910 — Motorbus World.
Close
Noticed an error?
If you've noticed an error in this article please click here to report it so we can fix it.
Keywords : Light Rail, Tram, Nottingham, Nottingham Corporation Tramways

As we recorded in cur last issue, the Royal Automobile Club official certificate of test has been secured by the Shrapnel Splashguard Co., Ltd., of 266a, South Lambeth Road, S.W. We now reproduce a photograph of a Tilling's motorbus undergoing the actual test.

It is likely that, at the licensing meeting of the Herne Bay Urban District Council next May, final applications for licences to run public-service motorbuses between that town and Canterbury will be made by two proprietors at least.

The question of linking up Preston with Brighton, by means of a motorbus service, has been under consideration at the handsaof the Brighton Town Council recently. A certain section of the Council considers that the local motorbus company, which profitably operates other routes in the district, should be required to undertake this new service, of whose success there is no definite assurance. The company, in effect, is not inclined to undertake this risk, but has offered to provide buses to the Corporation at cost price, so that they can be run by the Tramways Committee. The Town Council, so

far, seems unable to do anything to bring about an agreement in this matter, but we understand that the inhabitants of the suburb of Preston are not inclined to allow the subject to drop in this way, and a public meeting is shortly to be convened to consider further proposoh:.

Mr. Burns's Socialistic Dream. Mr. John Burns in the course of a speech in support Of a Progressive candidate for the forthcoming L.C.C. elections, stated that he would like to see a universal penny fare all over the London tramway system. Why should there be any charge at all ? Increased Facilities.

The Alfreton-Clay Cross service, which is being maintained by Commercial Car Hirers, Ltd., is proving successful, and a relief bus has now been sent up from headquarters to give further accommodation.

Allen's Motor Express, Ltd., registered with a capital of £10,000 in 21 shares, by Messrs. Slaughter and May, 13, Austin Friars, E.C., to carry on the business of proprietors of lorries, motorcars, omnibuses, vans, etc.

The New Peverell Road Car Co., Ltd., with an authorized capital of £2,000 in V. shares, and with its offices at Outland Mills, Devonport, has been registered ; it is intended to carry on the working of stage carriages, or omnibuses, and the business of common carriers, etc., also proprietors of motorcars, buses, vans, and cabs, etc.

Some doubt already has occurred to certain of those Northampton councillors who are responsible for committing the Corporation to further tramway extensions. We recommend these authorities thoroughly to peruse the recently-issued Board of Trade Annual Report on Tramways, in conjunction with Sir Herbert Jekyll's justly-drawn comparisons between motorbuses and tramcars in the latest Annual London Traffic Report, dated 30th October, 1909. Further tramway extension will, in future, we should think, be undertaken warily.