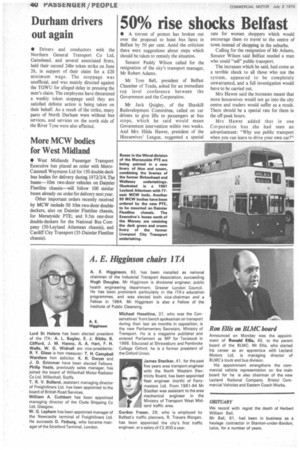 Page 42, 3rd July 1970 — A. E. Higginson chairs ITA
Close
Noticed an error?
If you've noticed an error in this article please click here to report it so we can fix it.
Keywords : British Leyland, Transport, Leyland Motors, Willenhall, Land Transport

A. E. Higginson. 63, has been installed as national chairman of the Industrial Transport Association, succeeding Hugh Douglas. Mr Higginson is divisional engineer, public health engineering department, Greater London Council. He has been prominent particularly in the ITA's education programmes, and was elected both vice-chairman and a Fellow in 1964. Mr Higginson is also a Fellow of the Institute of Public Cleansing.

T. R. V. Bolland, assistant managing director of Freightliners Ltd, has been appointed to the board of British Road Services.

William A. Cuthbert has been appointed managing director of the Clyde Shipping Co Ltd, Glasgow.

W. G. Lapham has been appointed manager of the Newcastle terminal of Freightliners Ltd. He succeeds D. Finburg, who became manager of the Stratford Terminal, London. Michael Heseltine, 37. who was the Conservatives front bench spokesman on transport during their last six months in opposition. is the new Parliamentary Secretary, Ministry of Transport. He is a magazine publisher and entered Parliament as MP for Tavistock in 1966. Educated at Shrewsbury and Pembroke College Oxford. he is a former president of the Oxford Union.

James Staziker, 41. for the past five years area transport engineer with the North Western Electricity Board, has been appointed fleet engineer lnorth) of Ferrymasters Ltd. From 1961-64 Mr Staziker was assistant to the area mechanical engineer in the Ministry of Transport West Midland traffic area.

Gordon Fraser, 28, who is employed by Belfast's traffic planners, R. Travers Morgan, has been appointed the city's first traffic engineer, at a salary of £2,600 a year. Announced on Monday was the appointment of Ronald Ellis, 45, to the parent board of the BLMC. Mr Ellis, who started his career as an apprentice with Leyland Motors Ltd. is managing director of BLMC's truck and bus division.

His appointment strengthens the commercial vehicle representation on the main board for he is also chairman of the new Leyland National Company. Bristol Commercial Vehicles and Eastern Coach Works.