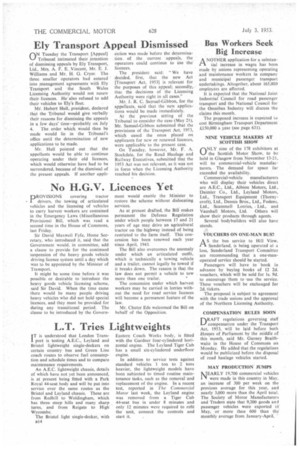 Page 48, 3rd July 1953 — L.T. Tries Lightweights
Close
Noticed an error?
If you've noticed an error in this article please click here to report it so we can fix it.

IT is understood that London Trans1 port is testing A.E.C., Leyland and Bristol lightweight single-deckers on certain country bus and Green Line coach routes to observe fuel consumption and schedule times and to compare maintenance requirements.

An A.E.C. lightweight chassis, details of which have not yet been announced, is at present being fitted with a Park Royal 44-seat body and will be put into service over the same routes as the Bristol and Leyland chassis. These arc from Redhill to Woldingham, which has three steep hills and many sharp turns, and from Reigate to High Wycombe.

The Bristol light single-decker, with B14 Eastern Coach Works body, is fitted with the Gardner four-cylindered horizontal engine. The Leyland Tiger Cub has a small six-cylindered underfloor engine.

In addition to service tests against standard vehicles 1 ton to 2 tons heavier, the lightweight models have been subjected to timed routine maintenance tasks, such as the removal and replacement of the engine. In a recent test, reported in The Commercial Motor last week, the Leyland engine was removed from a Tiger Cub 44-seat bus in under 8 minutes and only 12 minutes were required to refit the unit, connect the controls and start it.