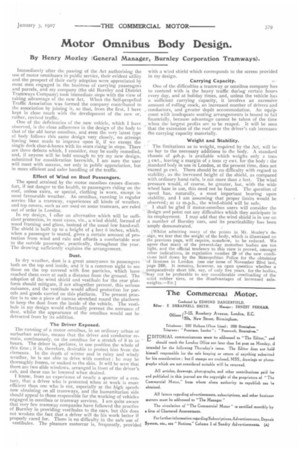 Immediately after the passing of the Act authorising. the use of motor omnibuses in public service, their evident utility and the prospect of their early adoption were appreciated by most men engaged in the business of carrying passengers and parcels, and my company (the old Burnley and District Tramways Company) took immediate steps with the view of taking advantage of the new Act. When the Self-propelled Traffic Association was formed the company contributed to the association by joining it, so that, from the first, I have kept in close touch with the development of the new or, rather, revived traffic.

One of the deficiencies of the new vehicle, which I have observed, is the close adherence in the design of the body to that of the old horse omnibus, and even the very latest type of body follows this same design very closely, no attempt having been made to improve upon it, if we except the single deck char-a-bancs with its seats rising in steps. There are three defects which, I consider, may be easily remedied, and, if anyone will be bold enough to try my new design, submitted for consideration herewith, I am sure the user will meet with success, not only in public appreciation, but in more efficient and safer handling of the traffic.

Effect of Wind on Roof Passengers.

The speed attained by the motor omnibus causes discomfort, if not danger to the health, to passengers riding on the roof, unless extra, or special, clothing is worn, except in most favourable weather. An omnibus, running in regular service like a tramway, experiences all kinds of weather, and top covers, such as are used on some tramcars, are ruled out of order in London.

In my design, I offer an alternative which will be sufficient protection, in most cases, viz., a wind shield, formed of wood framing and glass, instead of the usual low hand-rail. The shield is built up to a height of 4 feet 6 inches, which, when a passenger is seated, gives a certain amount of protection from wind and rain and affords a comfortable seat to the outside passenger, practically, throughout the year. The drawing sufficiently explains the arrangement.

In dry weather, dust is a great annoyance to passengers both on the top and inside, and it is a common sight to see those on the top covered with fine particles, which have reached them even at such a distance from the ground. The adoption of the wind shield and vestibule for the rear platform should mitigate, if not altogether prevent, this serious nuisance, and the vestibule would afford protection for parcels and goods carried on this platform. The present practice is to use a piece of canvas stretched round the platform to keep the dust from the inside of the vehicle. The vestibule in my design would effectually prevent the entrance of dust, whilst the appearance of the omnibus would not be detracted from by its addition.

The running of a motor omnibus, in an ordinary urban or surburban service, means that the driver and conductor remain, continuously, on the omnibus for a stretch of 8 to io hours. The driver is, perforce, in one position the whole of this time; it is, therefore, desirable to protect him from the elements. In the depth of winter and in rainy and windy weather, he is not able to drive with comfort ; he may be thoroughly frozen, or soaked to the skin. It will be seen that there are two slide windows, arranged in front of the driver's cab, and these can be lowered when desired.

I know, from an experience of nearly a quarter of a century, that a driver who is protected when at work is more efficient than one who is not, especially at the high speeds now obtaining on all tramways, and the humanitarian side should appeal to those responsible for the working of vehicles engaged in omnibus or tramway services. I am quite aware that very few tramway companies have followed the practice of Burnley in providing vestibules to the cars, but this does not weaken the fact that a driver will do his work better if properly cared for. There is no. difficulty in the safe use of vestibules. The pleasure motorcar is, frequently, provided with a wind shield which corresponds to the screen provided in my design.

One of the difficulties a tramway or omnibus company has to contend with is the heavy traffic during certain hours every day, and at holiday times, and, unless the vehicle has a sufficient carrying capacity, it involves an excessive amount of rolling stock, an increased number of drivers and conductors, and greater depot accommodation. An equipment with inadequate seating arrangements is bound CO fail financially, because advantage cannot be taken of the time when dm largest profits are to be reaped. It will be seen that the extension of the roof over the driver's cab increases the carrying capacity materially.

The limitations as to weight, required by the Act, win be no bar to the necessary additions to the body. A standard chassis of 4oh.p. is available which weighs only 2 tons 3 cwt., leaving a margin of 2 tons 17 cwt. for the body : the standard body in use in London, at the present time, does not exceed 30 cwt. There should be no difficulty with regard to stability, as the increased height of the shield, as compared with ordinary hand rails, is not more than 2 feet. The wind pressure would, of course, be greater, but, with the wide wheel base in use, this need not be feared. The question of speed has, naturally, a most important bearing upon stability, and I am assuming that proper limits would be observed; at 12 m.p.h., the wind-shield will be safe.

I shall be glad if motor-omnibus users will consider the design and point out any difficulties which they anticipate in its employment. I may add that the wind shield is in use on a number of Burnley cars, and its practicability has been amply demonstrated.

[Whilst admiring many of the points in Mr. Mozley's design, we fear that the weight of the body, which is illustrated on the previous page, will require, somehow, to be reduced. We agree that many of the present-day motorbus bodies are too. light, and the official tendency to this view is proved, amongst other indications, in regulation number 29 of the new conditions laid down by the Metropolitan Police for the obtaining of licenses in London (see our issue of November 22nd last, page 249). It remains, however, an open question whether a comparatively short life, say, of only five years, for the bodies, may not be preferable to any considerable overloading of the solid rubber tires, or the disadvantages of increased axleweights.—ED.]