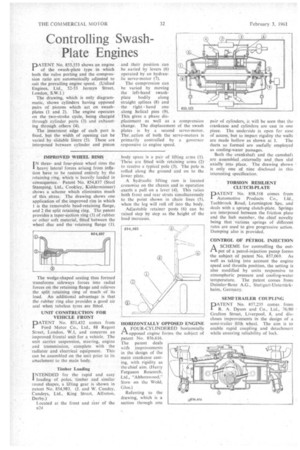 Page 86, 3rd February 1961 — IMPROVED WHEEL RIMS I N threeand four-piece wheel rims the
Close
Noticed an error?
If you've noticed an error in this article please click here to report it so we can fix it.

heavy lateral forces arising from inflation have to be resisted entirely by the retaining ring, which is heavily loaded in consequence. Patent NO. 854,837 (Steel Stamping, Ltd., Cookley, Kidderminster) shows a scheme which eliminates much of this stress. The drawing shows one application of the improved rim in which I is the removable bead-retaining flange, and 2 the split retaining ring. The patent provides a taper-section ring (3) of rubber or other soft material, fitted between the wheel disc and the retaining flange (1).

The wedge-Shaped seating thus formed transforms sideways forces into radial forces on the retaining flange and relieves the split retaining ring of much of its load. An additional advantage is that the rubber ring also provides a good air seal when tubeless tyres are fitted.

PATENT No. 851,432 comes from Ford Motor Co., Ltd., 88 Regent Street, London, W.1, and concerns an improved frontal unit for a vehicle. The unit carries suspension, steering, engine and transmission, complete with the 'radiator and electrical equipment. This can be assembled on the unit prior to its ariachment to the main body.

Timbei. Loading 'INTENDED for the rapid and easy I loading of poles, timber and similar round shapes, a lifting gear is shown in patent No. 854,983. (J. and W. Cundey, Cundeys, Ltd., King Street, Alfreton, Derby,) Located at the front and rear of the 1324 body space is a pair of lifting arms (I). The'se are fitted with retaining arms (2) to receive a typical pole (3). The pole is. rolled along the ground and on to the lower plate.

A hydraulic lifting ram is located crosswise on the chassis and in operation exerts a pull on a lever (4). This raises both front and rear struts simultaneously to the point shown in chain lines (5). when the log will roll off into the body.

Adjustable retainer posts (6) can be raised step by step as the height of the load increases.

HORIZONTALLY OPPOSED ENGINE A FOUR-CYLINDERED horizontally Plopposed engine forms the subject of patent No. 856,616. The patent deals with improvements in the 'design of ihe main crankcase casting, with rigidity as the chief aim. (Harry Ferguson Research, Ltd., "Abbotswood," Stow on the Wok!, Glos.) Referring to the drawing, which is a section through one

pair of cylinders, it will be seen that the crankcase and cylinders are cast in one piece. The underside is open for ease of access, but to impart rigidity the walls are made hollow as shown at 1. The ducts so formed are usefully employed as cooling-water passages.

Both the crankshaft and the camshaft are assembled externally and . then slid axially into place. The drawing shown is only one of nine disclosed in this interesting specification.

PATENT No. 858,518 comes from Automotive Products Co., Lid., Tachbrook Road, Leamington Spa, and deals with a sprung clutch-plate. Springs are interposed between the friction plate and the hub member, the. chief novelty being that various 'springs of different rates are used to give progressive action. Damping also is provided.

A SCHEME for controlling the out

put of a petrol-injection pump forms the subject of patent No. 857,069. As well as taking into account the engine speed and throttle position, the setting is also modified by units responsive to atmospheric pressure and cooling-water temperature. The patent comes from Daimler-Benz A.G., Stuttgart-Untertarkheim, Germany.

SEMI-TRAILER COUPLING PATENT No. 857,235 comes from R. A. Dyson and .Co., Ltd., 76/80 Grafton Street, Liverpool, 8, and discloses improvements in the design of a semi-trailer fifth wheel. The aim is to enable rapid coupling and detachment while ensuring reliability of lock.