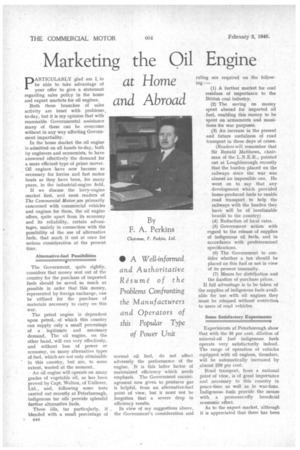 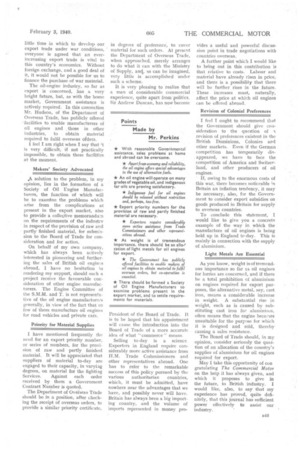 at Horne and Abroad

PARTICULARLY glad am L to be able to take advantage of your offer to give a statement regarding sales policy in the home and export markets for oil engines.

Both these branches of sales activity are beset with problems , to-day, but it is my opinion that with reasonable Governmental assistance many of these can be overcome without in any way affecting Government impartiality.

In the home market the oil engine is admitted on all hands to-day, both by engineers and economists, to have answered effectively the demand for a more efficient type of prime mover. Oil engines have now become as necessary for lorries and fast motor boats as they have been, for many years, in the industrial-engine field.

If we discuss the lorry-engine market first, and most readers of The Commercial Motor are primarily concerned with commercial vehicles and engines for them, the oil engine offers, quite apart from its economy and its reliability, certain advantages, mainly in connection with the possibility of the use of alternative fuels, that mark it out at once for serious consideration at the present time.

Alternative-fuel Possibilities The Government, quite rightly, considers that money sent out of the country for the purchase of imported fuels should be saved_ as much as possible in order that this money, represented by foreign exchange, can be utilized for the purchase of materials necessary to carry on this war.

The petrol engine is dependent upon petrol, of which this country can supply only a small percentage of a legitimate and necessary demand. The oil engine, on the other hand, will run very effectively, and without loss of power or economy, on many alternative types of fuel, which are not only obtainable in this country, but are, to some extent, wasted at the moment..

An oil engine will operate on many grades of vegetable oil, as has been proved by Capt. Walton, of Unilever, Ltd., and, following some tests carried out recently at Peterborough, indigenous tar oils provide splendid further alternative fuels.

These oils, tar particularly, if blended with a small percentage of B44 normal oil fuel, do not affect adversely the performance of the engine. It is this latter factor of maintained efficiency which needs emphasis. The Government encouragement now given to producer gas is helpful, from an alternative-fuel point of view, but it must not be forgotten that a severe drop in efficiency results.

_ In view of my suggestions above, the Government's consideration and ruling are required on the following :— (1) A further market for coal residues of importance to the British coal industry.

(2) The saving on money spent abroad for imported oil fuel, enabling this money to be spent on armaments and munitions for war purposes.

(3) An increase in the present and future usefulness of road transport in these days of crises.

(Readers will remember that Sir Ronald Alafthews, chairman of the L.N.E.R., pointed out at Loughborough recently that the burden placed on the railways since the war was almost an impossible one. He went on to say that development which provided home-produced fuels to enable road transport to help the railways with the burden they have will be of inestimable benefit to the country)

(5) Government action with regard to the release of supplies of indigenous oil fuels, and in accordance with predetermined specifications.

(6) The Government to consider whether a tax should be placed on this fuel or not in view of its present immunity.

(7) Means for distribution and the fixation of purchase prices. If full advantage is to be taken of the supplies of indigenous fuels available for use with oil engines they must be released without restriction to users of road vehicles.

Experiments at Peterborough show that with the 35 per cent. dilution of mineral-oil fuel indigenous fuels operate very satisfactorily indeed. The range of operation of vehicles equipped with oil engines, therefore, will be automatically increased by .almost 250 per cent.

Road transport, from a national point of view, is of great importance and necessary to this country in peace-time as well as in war-time. Indigenous fuels provide the means with a pronouncedly beneficial economic effect.

As to the export market, although it is appreciated that there has been little time in which to develop our export trade under war conditions, everyone is agreed that an everincreasing export trade is vital to this country's economics. Without foreign exchange, and a good deal of it, it would not be possible for us to finance the purchase of war material.

The oil-engine industry, SO far as export is concerned, has a very bright future, but, as with the home market, Government assistance is actively required. In this connection Mr. Hudson, of the Department of Overseas Trade, has publicly offered -facilities to enable manufacturers of oil engines and , those in other industries, to obtain material required to fulfil overseas ofders.

I feel I am right when I say that 't is very difficult, if not practically impossible, to obtain these facilities at the moment.

Makers' Society Advocated fa solution to the problem, in my opinion, lies in the formation of a Society of Oil Engine Manufacturers, the function of which will be to examine the problems which arise from the complications at present in the export market, also to provide a collective memorandum on the requirements of the industry in respect of the provision of raw and partly finished material, for submission to the Board of Trade for consideration and for action.

On behalf of my own company, which has always been actively interested in pioneering and furthering the sales of British oil engines abroad, I have no hesitation in rendering my support, should such a project receive the favourable consideration of other engine manufacturers. The Engine Committee of the S.M.M. and T. is not representative of the oil engine manufacturers generally, in view of the fact that to few of them manufacture oil engines for road vehicles and private cars.

Priority for Material Supplies I have mentioned frequently the need for an export priority number, or series of numbers, for the provision of raw and partly finished material. It will be appreciated that suppliers of material to-day are engaged to their capacity, in varyiag degrees, on material for the fighting Services. Against each order received by them a Government Contract Number is quoted.

The Department of Oveiseas Trade should be in a position, after checking the receipt of overseas orders, to provide a similar priority certificate, in degrees of preference, to cover ' material for such orders. At present the Department of Overseas Trade, when approached, merely arranges to do what it can with the Ministry of Supply, and, as can be imagined, very little is accomplished under such a scheme.

It is very pleasing to realize that a man of considerable commercial experience, quite apart from politics, Sir Andrew Duncan, has now become President of the Board of Trade. It is to be hoped that his appointment will cause the introduction into the Board of Trade of a more accurate idea of what " commerce " means.

Selling to-day is a science. Exporters in England require considerably more active assistance from H.M. Trade Coihmissioners and other representatives abroad. One has to refer to the remarkable success of this policy pursued by the various authoritarian countries, which, it must be admitted, have nowhere near the advantages that we have, and possibly never will have. Britain has always been a big importing country, and the volume of imports represented in money pro

vides a useful and powerful discussion point in trade negotiations with countries overseas.

A further point which I would like to bring out in this contribution is that relative to costs. Labour and material have already risen in price, and there is a possibility that there will be further rises in the future. These increases must, naturally, affect the price at which oil engines can be offered abroad.

Revision of Colonial Preferences I feel I ought to recommend that the Government should give consideration to the question of a revision of preferences existent in the British Dominions, Colonies and other markets. Even if the German competition has temporarily dis • appeared, we have to face the competition of America and Switzerland, and other producers of oil engines.

' If, owing to the enormous costs of this war, there becomes noticeable in Britain an inflation tendency, it may be necessary, also, for the Government to consider export subsidies on goods produced in Britain for supply to overseas countries.

To conclude this statement, I would like to give you a concrete example of the way in which the manufacture of oil engines is being held up in England to-day. This is mainly in connection with the supply of aluminium.

Light Metals Are Essential As you know, weight is of tremendous importance so far as oil engines for lorries are concerned, and if there be a total prohibition cf aluminium on engines required for export purposes, the alternative metal, say, cast iron, means a considerable increase in weight. A substantial rise in weight, such as is caused by substituting cast iron for aluminium, often means that the engine beconies unsuitable for the purpose for which it is designed and sold, thereby causing a sales resistance.

The Board of Trade should, in my opinion, consider seriously the question of an allocation of the conntry's supplies of aluminium for oil engines required for export.

May I take this opportunity of con gratulating The Commercial Motor on the help it has always given, and which it proposes to give in the future, to British industry. I would like, also, to say that my experience has proved, quite definitely, that this journal has sufficient power effectively to• assist our industry.