British Ambulances for Service in Finland 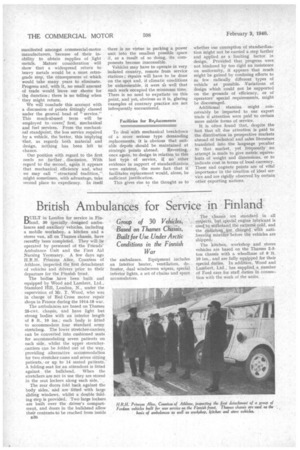 Page 56, 3rd February 1939 — British Ambulances for Service in Finland
Close
Noticed an error?
If you've noticed an error in this article please click here to report it so we can fix it.
Keywords : Hospitality / Recreation

BUILT in London for service in FinViand, 30 specially designed ambulances and auxiliary vehicles, including a mobile workshop, a kitchen and a stores van, all on Thames chassis, have recently been completed. They will be operated by personnel of the Friends' Ambulance Unit and the First Aid Nursing Yeomanry. A few days ago H.R.H. Princess Alice, Countess of Athlone, inspected the firSt detachment of vehicles and drivers prior to their departure for the Finnish front.

The bodies have been built and equipped by Wood and Lambert, Ltd., Stamford Hill, London, N., under the supervision of Mr. T. Wood, who was in charge of Red Cross motor repair shops in France during the 1914-18 war.

The ambulances are based on Thames 25-cwt. chassis, and have light but strong bodies with an interior length of 8 ft.. 10 ins.; each body is fitted to accommodate four standard army stretcherfi. The lower stretcher-carriers can be converted into cushioned seats for accommodating seven patients on each side, whilst the upper stretchercarriers can be folded out of the way, providing alternative accommodation for two stretcher cases and seven sitting patients, or up to 14 seated patients. A folding seat for an attendant is fitted against the bulkhead. When the stretchers are not in use they are stored in the seat lockers along each side.

The rear doors fold back against the body sides,' and are fitted with large sliding windows, whilst a double -folding step is provided. Two large lockers are built over the driver's compartment, and doors in the bulkhead allow their con.tents.tri be reached from inside

is3ti the ambulance. Equipment includes an interior heater, ventilators, defroster, dual windscreen wipers, special interior lights, a set of chains and spare accumulators. The chassis arc standard in all respects, but ,special engine lubricant is used to withstand the extreme cold, and the radiator§.are charged with anti freezing mixture before the vehicles are shipped.

The kitchen, workshop and stores vehicles are based on the Thames 2-3ton chassis with a wheelbase of 9 ft. 10 ins., and are fully equipped for their special duties. In addition, Wood and Lambert, Ltd., has supplied a number of Ford cars for staff duties in connection with the work of the units.