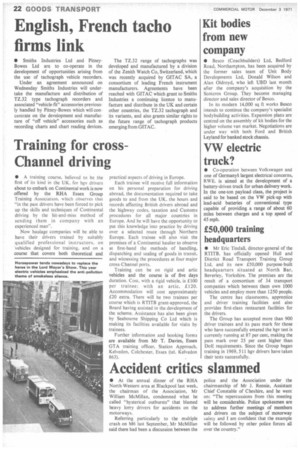 Page 24, 3rd December 1971 — £50,000 training headquarters • Mr Eric Tindall, director-general of the
Close
Noticed an error?
If you've noticed an error in this article please click here to report it so we can fix it.
Keywords : Education, Local Government In England, Kingston Upon Hull, Apprenticeship

RTITB, has officially opened Hull and District Road Transport Training 'Group Ltd, and its new £50,000 purpose-built headquarters situated at North Bar, Beverley, Yorkshire. The premises are the result of a consortium of 34 transport companies which between them own 1000 vehicles and employ more than 1250 people.

The centre has classrooms, apprentice and driver training facilities and also provides first-class restaurant facilities for the drivers.

The Group has accepted more than 900 driver trainees and its pass mark for those who have successfully entered the hgv test is currently running at 87 per cent, making the pass mark over 25 per cent higher than DoE requirements. Since the Group began training in 1969, 511 hgv drivers have taken their tests successfully.