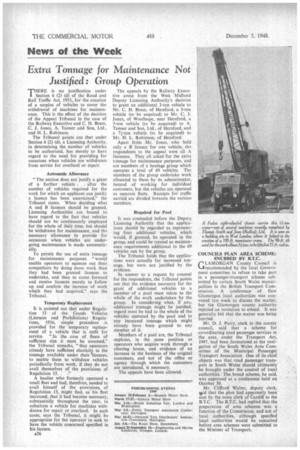 Page 28, 3rd December 1948 — News of the Week
Close
Noticed an error?
If you've noticed an error in this article please click here to report it so we can fix it.
Keywords : Transport, Vehicle, Law / Crime, Business / Finance

Extra Tonnage for Maintenance Not

THERE is no justification under 1. Section 6 (2) (d) of the Road and Rail Traffic Act, 1933, for the creation of a surplus of vehicles to cover the withdrawal of machines for maintenance. This is the effect of the decision of the Appeal Tribunal in the case of the Railway Executive and C. H. Brace, C. J. Jones, A. Tanner and Son, Ltd., and H. L. Robinson.

The Tribunal points out that under Section 6 (2) (d), a Licensing Authority, in determining the number of vehicles to be authorized, has merely to have regard to the need for providing for occasions when vehicles are withdrawn from service for overhaul or repair.

Automatic Allowance "The section does not justify a grant of a further vehicle . . after the number of vehicles required for the work for which an applicant can justify a licence has been ascertained," the Tribunal states. When deciding what A and B licences should be granted, Licensing Authorities are bound to have regard to the fact that vehicles should not be continuously employed for the whole of their time, but should be withdrawn for maintenance, and the necessary allowance to provide for occasions when vehicles are undergoing maintenance Is made automatically.

To permit the use of extra tonnage for maintenance purposes "would enable operators to squeeze out their competitors by doing more work than they had been granted licences to undertake, and then to come forward and receive licences merely to follow up and confirm the increase of work which they had acquired," says the Tribunal.

Temporary Replacement It is pointed out that under Regulation 15 of the Goods Vehicles (Licences and Prohibitions) Regulations, 1936, simple procedure is provided for the temporary replacement of a vehicle that is unfit for service. "In the case of fleets of sufficient size it must be assumed," the Tribunal remarks, " that operators already have sufficient elasticity in the tonnage available under their 'licences, to enable them to withdraw vehicles periodically from work, if they do not avail themselves of the provisions of Regulation 15. . ."

A haulier who formerly operated a small fleet and had, therefore, needed to avail himself of the provisions. of Regulation I5,. might find, as his fleet increased, that it had become necessary, substantially throughout the year, to substitute a vehicle for machines withdrawn for repair or overhaul. In such cases, says the Tribunal, it migh't be appropriate for the operator to seek to have the vehicle concerned specified in his licence.

Apart from Mr. Jones, who held only a B licence for one vehicle, the respondents to the appeal were all A licensees. They all asked for the extra tonnage for maintenance purposes, and are members of a haulage group which operates a total of 69 vehicles. The members of the group undertake work allocated to them by its administrator, instead of working for individual customers, but the vehicles are operated as separate fleets. Receipts for traffic carried. are divided between the various members.

Required for Pool It was contended before the Deputy Licensing Authority that the applications shonld be regarded as representing four additional vehicles, which would, if granted, be operated in the group, and could be treated as maintenance requirements additional to the 69 vehicles run by the group.

The Tribunal holds that the applications were actually for increased tonnage, but were not justified by the evidence.

In answer to a request by counsel for the respondents, the Tribunal points out that the evidence necessary for the grant of additional vehicles to a member of a pool must relate to the whole of the work undertaken by the group. In considering what, if any, additional tonnage might be justified, regard must be had to the whole of the vehicles operated by the pool and to any increased tonnage which might already have been granted to any member of it.

Members of a pool are, the Tribunal explains, in the same position as operators who acquire work through a clearing house, and evidence of an increase in the business of the original customers, and not of the office or agency through which the customers are introduced, is necessary.

The appeals have been allowed. COUNCILS PLAN AREA SCHEME: SNUBBED BY B.T.C.

/7LAMORGAN County Council is A—lrecommended by the local Government committee to refuse to take part in a passenger-transport scheme submitted by certain South Wales municipalities to the British Transport Commission. A conference of East Glamorgan local authorities was convened last week to discuss the matter, but the Glamorgan county authority rejected an invitation to attend. It was generally felt that the matter was being b urried.

Mr. D. J. Parry, clerk to the county council, said that a scheme for co-ordinating road passenger services in the area, under the Transport Act, 1947, had been formulated at the instigation of the South Wales Area Committee of the Municipal Passenger Transport Association. One of its chief objects was that road passenger transport in South Wales should ultimately be brought under the control of local authorities. The broad scheme, he said, was approved at a conference held on October 30.