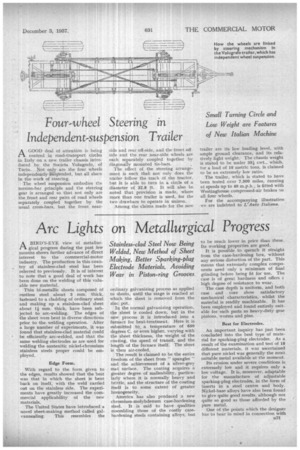 Page 29, 3rd December 1937 — Four-wheel Steering in Independent-suspension Trailer
Close
Noticed an error?
If you've noticed an error in this article please click here to report it so we can fix it.

A. GOOD deal of attention is being centred in road-transport circles in Italy on a new trailer chassis introduced by the Societa Volugrafo, of Turin. Not only are the four wheels independently-inspended, but all share in the work of steering.

The wheel suspension embodies the torsion-bar principle and the steering gear is arranged so that not only are the front and rear pairs of road wheels separately coupled together by the usual cross-bars, but the front near

side and rear off-side, and the front offside and the rear near-side wheels are each separately coupled together by diagonally mounted tie-bars.

The effect of the steering arrangement is such that not only does the trailer follow the track of the tractor, but it is able to turn in a circle of a diameter of 32.8 ft. It will also be noted that provision is made, where more than one trailer is used, for the two drawbars to operate in unison.

Among the claims made for the new trailer are its low loading level, with ample ground clearance, and its relatively light weight. The chassis weight is stated to he under 35i cwt., which, for a load of 10 metric tons, is claimed to be an extremely low ratio.

The trailer, which is stated to have been tested over 7,500 miles, running at speeds up to 40 m.p.h., is fitted with Westinghouse compressed-air brakes on all four wheels.

For the accompanying illustration we are indebted to L' Auto Italiana.