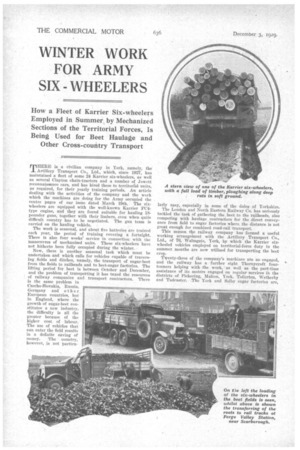 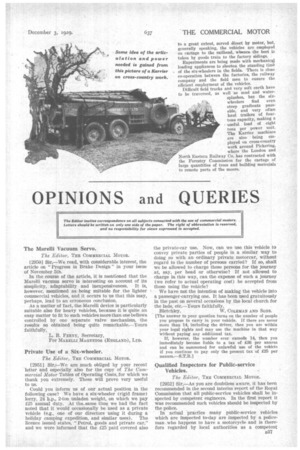 Page 62, 3rd December 1929 — WINTER WORK FOR ARMY
Close
Noticed an error?
If you've noticed an error in this article please click here to report it so we can fix it.

THERE is a civilian company in York, namely, the Artillery Transport Co., Ltd., which, since 1927, has maintained a fleet of some 24 Karrier six-wheelers, as well as several Clayton chain-tractors and a number of Jowett reconnaissance cars, and has hired these to territorial units, as required, for their yearly training periods. An article dealing with the activities of the company and the work which the machines are doing for the Army occupied the centre pages of our issue dated March 19th. The sixwheelers are equipped with the well-known Karrier FC4type engine, and they are found suitable for hauling 18pounder guns, together with their limbers, even when quite difficult country has to be negotiated. The gun team is carried on the hauling vehicle.

The work is seasonal, and about five batteries are trained each year, the period of training covering a fortnight. There is also four weeks' service in connection with the mananivres of mechanized units. These six-wheelers have not hitherto been fully occupied during the winter.

Now, there is another seasonal task which must be undertaken and which calls for vehicles capable of traversing fields and ditches, namely, the transport of sugar-beet from the fields to railheads and to beet-sugar factories. The lifting period for beet is between October and December, and the problem of transporting it has taxed the resources of railway companies and transport contractors. There is the same problem in Czecho-Slovakia, Russia, Germany and other European countries, but in England, where the growth of sugar-beet constitutes a new industry, the difficulty is all the greater because of the higher cost of labour. The use of vehicles that can enter the field results in a definite saving of money. The country, however, is not particu larly easy, especially in some of the dales of Yorkshire.

The London and North Eastern Railway Co. has seriously tackled the task of gathering the, beet to the railheads, also competing with haulage contractors for the direct conveyance from field to sugar factories where the distance is not great enough for combined road-rail transport.

This season the railway company has formed a useful working arrangement with the Artillery Transport Co., Ltd., of 76, Walingate, York, by which the Karrier wheeled vehicles employed on territorial-force duty in the summer months are now utilized for transporting the beet crop.

Twenty-three of the company's machines are so engaged, and the railway has a further eight Thornyeroft fourtonners helping with the work, as well as the part-time assistance of its motOrs engaged on regular services iii the districts of Pickering, Malton, York, Tollerton, Wetherby and Tadcaster. The York and Selby sugar factories are, to a great extent, served direct by motor, but, generally speaking, the vehicles are employed on cartage to the railhead, whence the beet is taken by goods train to the factory sidings. Experiments are being made with mechanical loading appliances to shorten the standing time of the six-wheelers in the fields. There is close co-operation between the factories, the railway company and the field men to ensure the efficient employment of the vehicles. Difficult field tracks and very soft earth have to be traversed, as well as mud and watersplashes, but the sixwheelers find even steep gradients passable, and very often haul trailers of fourtons capacity, making a useful load of eight tons per power unit. The Karrier machines are also being employed on cross-country work around Pickering, where the London and North Eastern Railway Co. has contracted with the Forestry Commission for the cartage of large quantities of trees and building materials to remote parts of the moors.